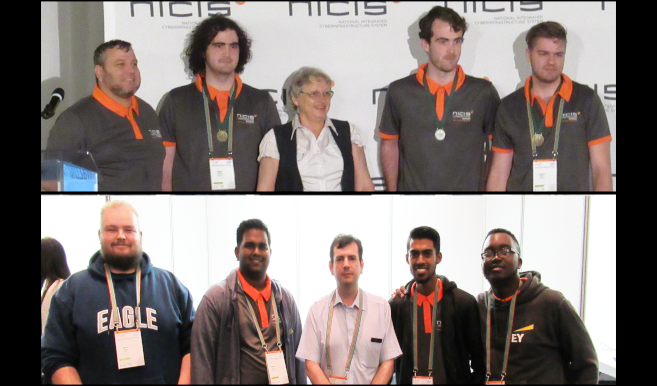 The Computer Science team receiving its award (top) and the Engineering team (bottom).

The Cyber Security Challenge is designed to allow participants to test their skills and learn in both defensive and offensive techniques in a safe environment. The aim is to increase skilled entries into the cyber security workforce in South Africa, where there is a shortage of cyber security professionals. The challenge was run by the South African National Research Network (SANReN), and sponsored by Microsoft, F-Secure, and Cyanre.

A total of 12 teams participated - nine from South Africa and one each from Botswana, Namibia and Mozambique. These teams qualified for the finals after participating in a preliminary round consisting of over 400 students from the four countries.

The Student Cluster Competition - run by the Centre for High Performance Computing - tasks students with designing the hardware and software of a high-performance computing cluster using a set budget. Following a preliminary selection and training round held at the University of Pretoria, a UKZN team consisting of four third-year students - Mr Justin Kistnan, Ms Kalreen Govender, Mr Benjamin Bedasi and Mr Karthigan Naidoo - was selected to progress to the national round.

Over the course of the competition, the team spent many sleepless nights in an attempt to achieve the highest score in a suite of benchmarks provided by the organisers.

At the conclusion, Govender was selected as a member of the team to represent South Africa at the International round of the competition to be held in Germany later this year. As part of the SA team,

Govender travelled to Texas in the United States for training, also fitting in some sightseeing, visiting NASA and the Texas Advanced Computing Center.

Van Niekerk was also invited to present at the National Integrated Cyber Infrastructure System (NICIS) Cyber Security Engagement Session on the day after the challenge. His presentation was titled: Evolving Cybersecurity: A South African Perspective.