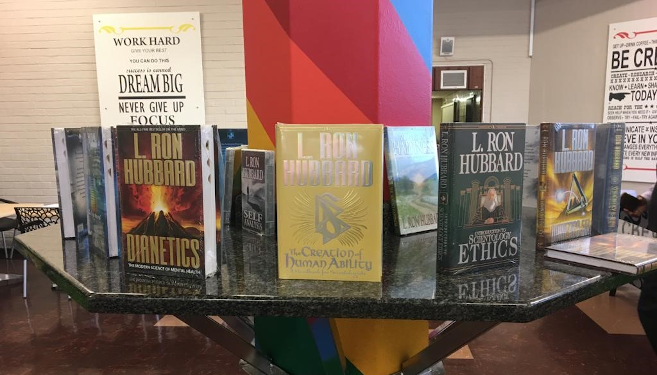 The latest editions of American author and founder of the Church of Scientology, L. Ron Hubbard.

Books Authored by Church of Scientology Founder Donated to UKZN

United States-based Bridge Publications has given UKZN Libraries 18 of the latest editions of American author and founder of the Church of Scientology, L. Ron Hubbard’s non-fiction books.

In 1950, Hubbard authored Dianetics: The Modern Science of Mental Health and established a series of organisations to promote his controversial beliefs.

Now an international top-selling author, Hubbard is named by the Guinness Book of World Records as the globe’s “most translated author” and as the author with the most published works.

Bridge Publications, a non-profit organisation specialising in publishing Hubbard’s non-fiction writing, donated the latest editions of his work and DVDs which will be distributed among UKZN’s campuses and libraries.

Manager: Library Information Services on the Pietermaritzburg campus, Dr Nonhlanhla Ngcobo thanked Bridge Publications, saying: ‘We appreciate their kindness and will be putting these books to very good use.’

Ngcobo confirmed that the first shipment had already been received on the Westville campus, while the other consignment was expected soon and would be allocated among the other UKZN campuses.

Principal Librarian on the Westville campus, Dr Richard Beharilal also thanked Bridge Publications as well as the company’s representative Ms Melisa Graffam, and Ms Ashika Pramlal who handles Library donations at UKZN, and everyone else involved.