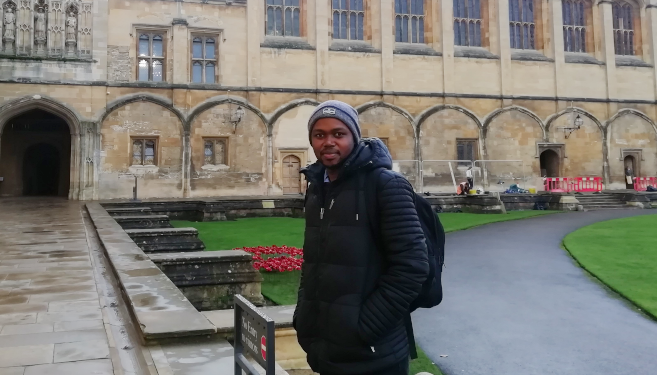 Mr Mlungisi Shabalala during his visit at Oxford University.

Hydrology PhD Candidate Benefits from Academic Visit to the UK

UKZN Hydrology PhD candidate, Mr Mlungisi Shabalala, has returned from a two-month academic visit to the United Kingdom which, he says, reaffirmed the value of the education he has received.

The visit was part of the new Advanced Academic and Professional Development Programme run by the Institute of Natural Resources (INR) in partnership with the International Water Security Network (IWSN), the University of West England (UWE) and UKZN’s Centre for Water Resources Research (CWRR).

For the majority of the visit, Shabalala was hosted by Professor Chad Staddon, IWSN Chair based at the Department of Geography and Environmental Management at UWE in Bristol. He also spent three weeks at Cranfield University, hosted by Professor Tim Hess, a Principal Investigator for the work package that includes INR in a project investigating the resilience of the UK Food System funded by Global Food Security Programme.

While at UWE, Shabalala presented a seminar titled: The Resilience of the UK Fresh Fruit System to Water- Related Risks: a Case Study from a Semi-Arid South African Catchment, and attended the Lloyd’s Register Foundation Conference in London. During his time at Cranfield he attended the About Drought meeting in London.

Shabalala, who is also lecturer in the Hydrology discipline at the University of Zululand, went on to spend two days at Oxford University, engaging in project-related meetings with Dr Monika Zurek, Dr John Ingram and Professor Rob Hope, and took the opportunity to tour the historic town.

‘During my time in the UK, I was able to accelerate my research, particularly into the UK Food Systems project, attract interest in my PhD research, and develop numerous connections for potential collaboration,’ he said.

Shabalala also used the opportunity to learn about how UK universities operate as opposed to their South African counterparts, and to visit as much of the country as he could, weather permitting.

‘I learned a lot of research-related skills through interacting with several experts in climate, water, land, food, energy and engineering relevant research,’ he said.

Shabalala thanked Mr Duncan Hay, Executive Director of the INR, for the opportunity, and also Staddon and Hess for their hospitality.

Shabalala said the most amazing (and unexpected) result of the trip was the effect it had on his family and friends, who were excited at the opportunity for him, and whose excitement motivated him to work harder.

‘That’s the biggest impact the trip had - a reflection of where I come from and how far I can go, through education,’ said Shabalala. He hoped to inspire young people, particularly those from disadvantaged communities, to believe that education can improve their lives and those of their families.

Shabalala is from eMaswazini-KwaSimahla near Winterton. His PhD, supervised by Dr Michele Toucher and Dr Alistair Clulow, investigates the potential hydrological impacts of replacing commercial forestry with macadamia nuts by measuring and comparing the water use of these two land use activities in the Maputaland Coastal Plain in northern KwaZulu-Natal.