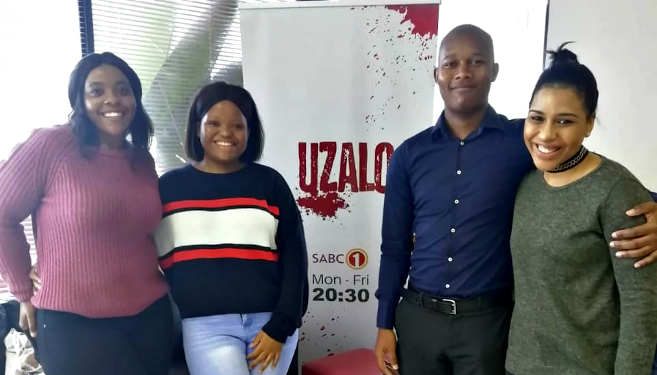 Uzalo: Blood is Forever, produced by Stained Glass Productions, is South Africa’s most watched soap opera with its captivating drama narrative situated in the KwaZulu-Natal township of KwaMashu. The soapie, predominately targeted at Black African isiZulu speaking viewers, tells the story of two babies from different families who were accidentally swapped in hospital after birth, and the resulting drama and feud between the two families.

It also highlights aspects of culture, identity and social issues in KwaMashu.

The students, who had based their honours research project on the show, were given the opportunity to visit the Uzalo studio and interview executive producer Mmamitsi Thibedi, asking her questions relevant to their dissertations. They also presented their research findings to her.

Moeketsi said the Uzalo experience was both exciting and memorable. ‘The night before the trip to the studio, I was so excited I could not sleep as we were going to see most of the soap’s stars and take tons of pictures with the cast. It was my first visit to a television show studio.’

The students, who spoke to Thibedi about the production process - including scriptwriting and how the soapie comes to life on screen, were given a complete tour of the studio. They also met with two of the cast members, who were shooting on the day.

‘What was most thrilling about touring the studio was being able to link what I usually see on Uzalo and what I actually saw at their studio,’ said Moeketsi. ‘The studio was exceptionally well structured with each cubical symbolising each room shown on the soap. Each cubical held a realist portrayal of actual settings, including real and actual functioning, lights, taps, electrical plugs, stoves and other appliances. Our tour guide answered all our questions and showed us every aspect of the studio set which made our experience all the more special.’