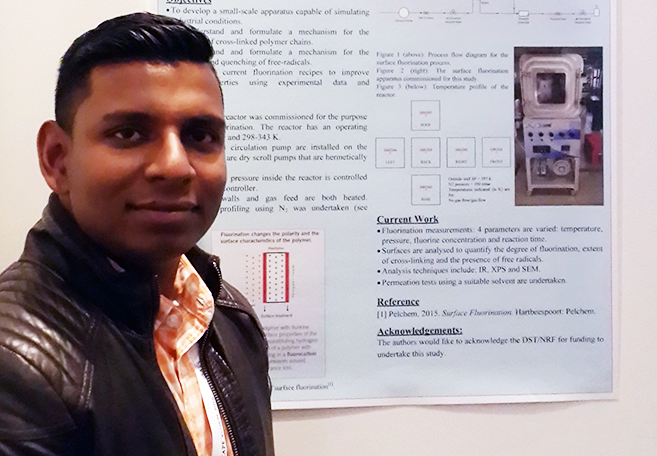 Dr Inbanathan Govender was awarded his PhD in Chemical Engineering.

Doctoral Graduate Attracted to UKZN by its Excellent Engineering Programme

UKZN’s highly rated Engineering programme attracted Dr Inbanathan Govender to study at the Institution and now he has graduated with a PhD in Chemical Engineering.

Said Govender: ‘I enrolled for my BSc Chemical Engineering degree at UKZN in 2008. In my final undergraduate year, Prof Deresh Ramjugernath gave a lecture on the value to society of postgraduate studies, and more broadly, research. From that point on, I knew I wanted to pursue a career in research.’

Govender wasted no time and started his MSc in Chemical Engineering in 2012, based in Ramjugernath’s Thermodynamics Research Unit (TRU). Having completed his masters, he was approached in 2015 by the Fluorochemical Expansion Initiative (FEI) to pursue his PhD.

‘The FEI is seen by the government as a means to drive beneficiation of South Africa’s rich mineral resources. That was a value proposition that appealed to me,’ said Govender.

Govender’s PhD research was titled: Application of Surface Fluorination Techniques for the Improvement of Barrier Properties of HDPE Bottles, and involved studying the effects of fluorinating plastic bottles on the bottle’s barrier properties.

‘A common example of a fluorinated material is a jerry can,’ said Govender. ‘In order to minimise permeation (loss of petrol through the can walls), the can is fluorinated. In the fluorination process, fluorine gas – usually mixed with nitrogen – reacts with the surface of the jerry can. The fluorine replaces hydrogen on the surface of the can and forms C-F bonds. These bonds give the can improved barrier properties.’

Looking back on his time at UKZN, Govender said: ‘Above all else, the process was deeply rewarding, although long hours on the plant collecting data did not seem rewarding at the time. During my PhD, I experienced several difficulties – delays in procurement, experiments not going as planned – but I pushed through. A PhD by definition means that you are doing something no-one else has done before. That in itself was enough motivation to get me across the finish line.’

Govender thanked his partner for her love and understanding as well as his parents for their support and encouragement over the many years of his education journey.

‘I come from a family with very humble beginnings. My dad worked as a labourer and my mum was a home executive. I was the first in my family to attend university full time and subsequently obtain a degree. Despite facing economic challenges, my parents were able to send me to university. I am eternally grateful for that.’

‘It is great to see how the project developed in the hands of Inbanathan,’ said Lokhat. ‘It is also a great exemplar of a collaborative effort across three institutions and two provinces. I recall putting the initial concept note together but never imagined at that stage what an impact the research could have. Inbanathan is definitely one of the most positively motivated, intellectually capable and well-grounded individuals I have had the opportunity of supervising.’

Govender is currently a postdoctoral fellow at the Nuclear Corporation of South Africa (NECSA) where his current work involves the design of novel processes in the energy storage space. He is also training to obtain professional engineer status.