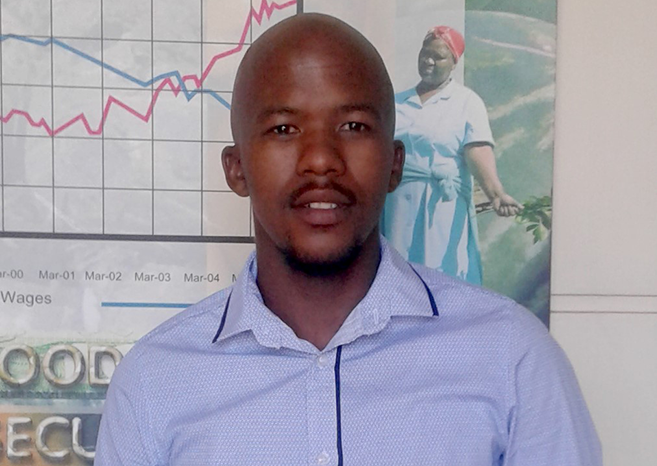 Makebe’s research, supervised by Professor Hussein Shimelis, involved the advancement of elite sorghum genotypes developed for Striga resistance and compatibility to the fungal biocontrol agent: Fusarium oxysporum strigae (FOS). He evaluated the genotypes for genetic diversity using simple sequence repeat (SSR) markers, characterised by the agronomic performance of elite sorghum from the greenhouse and field, and assessed nutritional qualities of the genotypes, including compositions of protein, amino acids, zinc and iron.

Makebe was inspired to pursue research in plant breeding and on this topic specifically, after observing how infestations of weeds affected subsistence farmers’ livelihoods in the villages where he grew up. Learning that humans can manipulate plant genetics to combat challenges such as parasitic weeds, Makebe set out to become a plant breeder with special emphasis on the protection of farmers’ livelihoods through his work.

The results of his research were interesting because of the high nutritional qualities identified in the elite sorghum genotypes he studied, especially the high lysine, an amino acid which is mostly deficient in cereals. The genotypes he worked with had desirable agronomic traits, Striga resistance, FOS compatibility and beneficial nutritional qualities, making them useful genetic resources for cultivar development and large-scale production and commercialisation.

Two papers from Makebe’s dissertation are under review for publication in highly accredited journals, while he recently presented his research at the South African Plant Breeders Association Conference in Pretoria.

Makebe has received a bursary from the South African Cultivar and Technology Agency to do his PhD at UKZN under the supervision of Shimelis. This will contribute to his career development as a plant breeder.

Makebe thanked Shimelis for this special study opportunity, and his guidance and encouragement throughout the research. He also thanked his postdoctoral researcher Dr Admire Shayanowako for his unreserved support, immeasurable guidance and valuable suggestions during the study, as well as his family and close friends for their support.