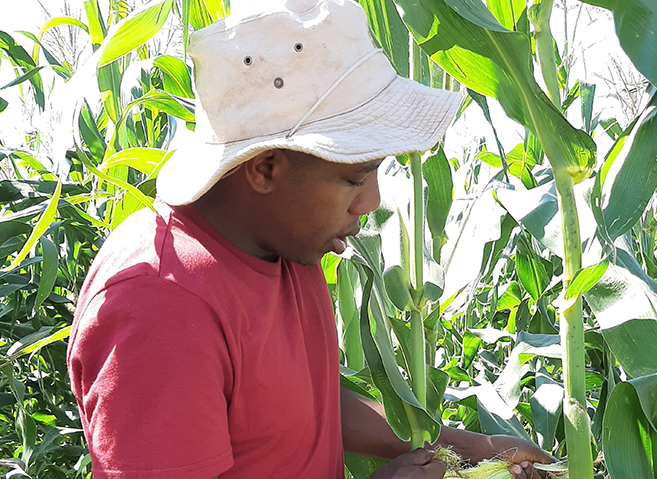 The fertiliser value of biogas slurry for maize and dry bean production and its effects on soil quality and carbon dioxide emissions was the subject of research by Dr Thandile Mdlambuzi of the Agricultural Research Council’s (ARC) Infruitec-Nietvoorbij Institute in Stellenbosch, who received his PhD in Soil Science from UKZN.

Having always been curious about the mechanisms behind crop growth, Mdlambuzi completed his undergraduate degree in soil science at the University of Fort Hare (UFH). His research was spurred when he noticed while smallholder farmers apply little to no chemical fertilisers to their crops because of the cost involved, South Africa has a major problem with waste management, particularly of organic waste.

‘I began considering the use of organic waste as a source of fertiliser, especially as I was concerned about the low levels of crop production by smallholder farmers, affected by the low use of chemical fertilisers and declining soil fertility,’ he said.

Mdlambuzi noted that the application of organic waste to soil provides plants with essential nutrients, supporting plant growth and the build-up of soil reserves, with organic fertiliser improvement of dry matter and nutrient uptake depending on the crop and the number of seasons of application.

‘Application of biogas slurry alone does not necessarily benefit the crop, especially dry bean grain yield, but co-application with chemical fertiliser has numerous benefits that could help smallholder farmers by reducing costs of synthetic chemical fertilisers,’ said Mdlambuzi. ‘However, there is a possibility of increased CO2 emissions from the use of biogas slurry in soils.’

He said fresh cattle manure could be used to produce biogas slurry, and had the same or even better nutrient value than chemical fertiliser.

Mdlambuzi, from a village in Qumbu in the Eastern Cape, enrolled at UKZN for his BSc Honours and continued to complete his master’s and PhD degrees at the University owing to its strength in agriculture and excellent research facilities.

He credits his strong support system of friends, family and mentors for providing the mental, physical, spiritual and emotional support needed to pursue his studies. He overcame the destruction of his trials and experiments by monkeys and guinea fowl one season by sleeping alongside his experiments to guard them the following season – his perseverance driven by a desire to inspire children from rural areas like his own that they could succeed.

Mdlambuzi completed his PhD under the ARC’s Professional Development Programme, initially working at their Institute of Soil, Water and Climate in Pretoria as a junior researcher, before moving to Infruitec-Nietvoorbij where he works on soil water management for production of table and wine grapes.

Mdlambuzi is driven to grow as a young researcher and a reliable leader. Human capacity development is close to his heart and he hopes to provide farmers with training and support improved livelihoods.

‘I aim to help South Africa continue making agriculture the foundation of a better livelihood for our ever-growing human population.’

He thanked supervisors Muchaonyerwa and Tsubo for their contributions to his research, and also his family and friends for their support.