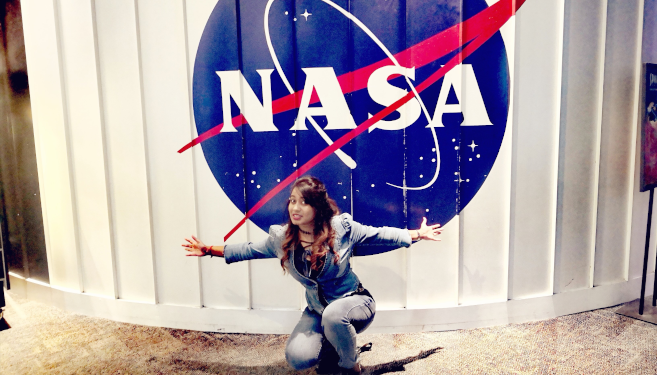 Ms Kalreen Govender, an Honours student in Computer Engineering at UKZN, was the only representative from KwaZulu-Natal in a seven-strong supercomputing team that spent two weeks at NASA and Dell headquarters in the United States (US) in January as part of an internship resulting from her participation in the Council for Scientific and Industrial Research and Centre for High Performance Computing (CHPC) Student Cluster Competition in 2019.

Govender is from Durban where she attended Wingen Heights Secondary School, and is currently also an embedded software engineer with netVendor, who funded her studies and with whom she will work full-time after completion. At netVendor, Govender works on smart metering solutions by programming and customising software. She said that previous vacation work at the company during her studies contributed insight and exposure that made engineering management and software development modules less intimidating.

Passionate about robotics, building and creating, and driven to understand the inner workings of things, she chose to study Computer Engineering at UKZN as it is renowned for its Engineering programmes and is also close to home. She said that studying at the University has honed her problem-solving capabilities, and that she has been exposed to numerous experts who positively influenced her academic development.

Participating in the June 2019 competition with three teammates took Govender to Pretoria where they competed against other teams to design, build and run benchmark tests in a quest to develop the best-performing cluster, or supercomputer, that could perform at the highest optimal computing rate to handle large applications or datasets.

Govender’s group was selected to progress to the national round of the Student Cluster Competition in December 2019 in Ekurhuleni, and was allocated a budget to build a supercomputer. Using Dell parts to achieve the best hardware setup and programming the 60 cores of central processing units using Linux, the team worked round the clock at the five-day competition to run benchmarks.

Despite the top prize being taken by the University of the Witwatersrand team, Govender was among the three next best students selected to represent South Africa’s student supercomputing team in the US, and at the International Supercomputing Conference scheduled to take place in Germany in June, but now due to take place remotely as a result of the COVID-19 pandemic.

Govender’s visit to the US took place in Texas, where the group spent time at Dell’s various offices with supercomputing teams, and at NASA. Entering NASA’s robotics laboratory made her feel instantly at home in the agency, where she dreams of working one day.

‘Working with the calibre of engineers there was phenomenal,’ said Govender. ‘Being in the room with them reinforced why I had chosen Computer Engineering. Technology and electronics provide us with limitless capabilities, and seeing those supercomputers and considering their potential solidified my urge to be an engineer to create, innovate and improve life.’

Govender has considered pursuing a master’s in the future, but for the moment is developing her expertise in robotics, and hopes to make her childhood dream of building and owning a personal household robot a reality.