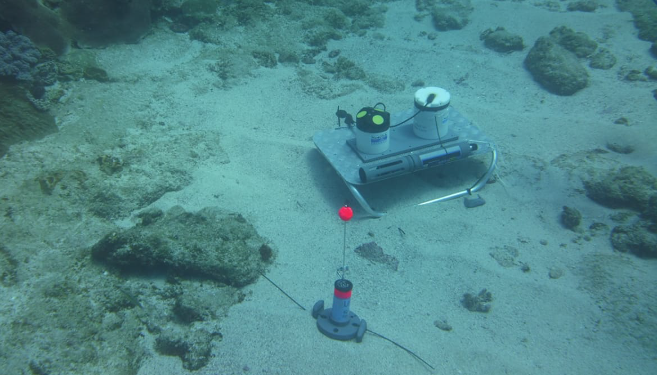 The EFML group, which is training two PhD students and six master’s students, is involved in innovative research to develop renewable energy options, improve coastal water quality, predict the future of shorelines under climate change conditions, and investigate the interplay of waves, currents and coral reefs.

In an era when new, cleaner, and environmentally sustainable renewable energy resources are needed, microalgae grown in bioreactors are being touted as a solution as they absorb carbon dioxide and produce oxygen while converting light into chemical energy through photosynthesis. To effectively cultivate algae for the production of biodiesel, the EFML is investigating the effect of ocean turbulence and mixing on algal productivity in flexible, floating, photobioreactors where the algae feed off wastewater discharges from coastal cities.

Drawing on the team’s physics, mathematics and biology backgrounds, the EFML is also exploring the physics of how coral reefs interact with varying flow regimes at micro and macro scales. At Sodwana close to the Agulhas current, the group is studying how mixing events drive changes in temperature and salinity, which in turn affect the biological functioning of the reef. This is important as changes in climatic behaviour lead to ocean acidification, rising sea levels, and changes in weather behaviour, threatening the health of coral reefs.

Another renewable energy project, assisted by a grant from UKZN InQubate, is the use of hydrokites to harness ocean current energy in the Agulhas current off South Africa’s east coast, one of the strongest, most consistent western boundary currents in the world. Kites have been used to harness wind and tidal energy, but have not previously been designed for use in such strong currents. The EFML is developing prototypes of a design that can be deployed and maintained on the continental shelf, with the simple, cost-effective, versatile design a promising prospect for job creation.

In collaboration with Professor David Dorrell in Electrical Engineering and supported by UKZN InQubate, the EFML is exploring the use of multi-oscillating water columns to generate renewable electricity along the South African coast, which is one of the world’s most energetic in terms of waves and ocean currents. Harnessing this untapped resource could make a significant contribution towards meeting the country’s energy needs.

The EFML’s resources and capacity include a small wave channel, optical measurement equipment and techniques to measure environmental flows in 4D (time-resolved in 3D), and a recently-acquired 15 metre water channel with a random wave generator. They have a Laser Doppler Anemometer for engineering flow measurements, field instrumentation, and smart instruments to measure mixing around coral reefs, urban air quality, and natural ventilation of buildings.

Pringle was recently awarded a Y-rating from the National Research Foundation in recognition of his potential to rapidly establish himself as an expert in his field, having produced an excellent PhD thesis with several high-level publications.