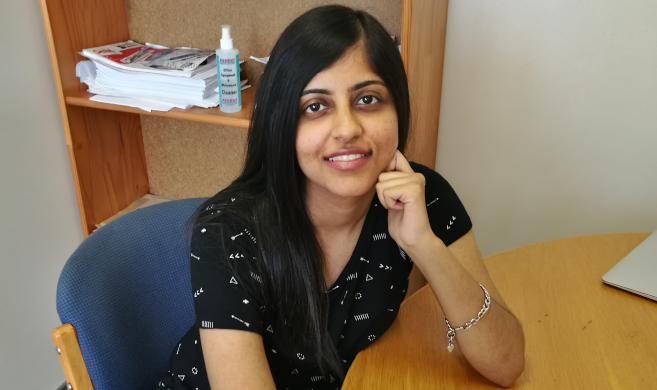 Mathematics PhD Candidate Features in Video About her Research

Ms Chevarra Hansraj, a PhD candidate in the School of Mathematics, Statistics and Computer Science’s (SMSCS) Astrophysics Research Centre (ARC), is featured in a video by the Centre of Excellence for Mathematical and Statistical Sciences (CoE-MaSS) in which she speaks about her research and the appeal of pursuing studies in applied mathematics.

Hansraj, whose research under the supervision of Professor Sunil Maharaj and Professor Rituparno Goswami concerns relativistic astrophysics, is the recipient of a doctoral bursary from the CoE-MaSS, an initiative of the National Department of Science and Innovation and the National Research Foundation hosted at the University of the Witwatersrand.

As a bursary holder, Hansraj attended the CoE-MaSS annual research meeting in October 2019 at the University of Pretoria, where participants from diverse fields were tasked with developing elevator pitches to promote their research after discussing new research areas and participating in science communication activities.

‘Often we are asked about what we do and the importance behind it - because research is so detailed, it is hard to sum up an answer in a few words,’ said Hansraj. ‘The whole process of writing, editing and shooting was really fun and professional and it’s an experience I won’t forget.

‘I really am grateful to the CoE-MaSS for their continued support and hospitality,’ said Hansraj, highlighting the importance of such workshops for developing young researchers.

In her pitch, Hansraj discussed using mathematical representations of the observations recorded by telescopes, such as the Square Kilometre Array, to understand these observations. This involves the use of equations, and in Hansraj’s case, these are the field equations developed by Einstein. She noted that some of Einstein’s mathematical theories predicted the existence of black holes before they were substantiated experimentally and with observation, confirming the importance of equations.

‘We aim to solve the Einstein field equations, which describe gravitational behaviour,’ explained Hansraj. ‘In order to analyse the properties and development of astrophysical objects like stars and galaxies, one needs to study the behaviour of their gravitational fields.’

Through her research, Hansraj is building on the work of many well-known scientists to contribute to answering fundamental questions about the universe.

Hansraj set a record for the highest mark ever recorded for an MSc (completed in a year) in UKZN’s College of Agriculture, Engineering and Science. For this research, she also received a South African Association for the Advancement of Science S2A3 medal for the best master’s thesis in the Sciences and Applied Sciences at UKZN in 2018.