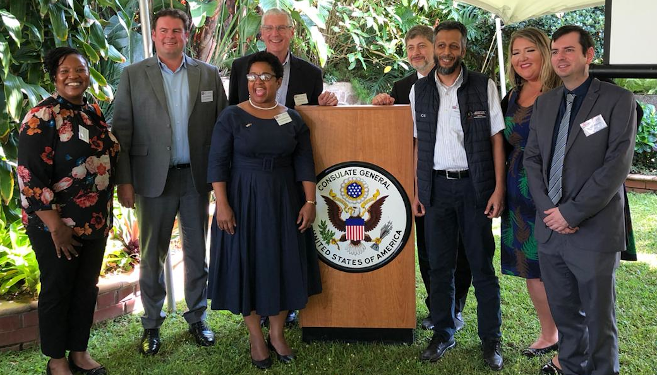 The cyber-threat situation in South Africa and its potential to become more serious as the country pursues technological growth to compete in the Fourth Industrial Revolution was the subject of a presentation delivered in Durban by senior lecturer in Computer Science at UKZN, Dr Brett van Niekerk.

The theme of the function – hosted by the Consul-General of the United States of America in Durban, Ms Sherry Zalika Sykes, in conjunction with Juniper Networks – was: Enabling Secure Networks of the Future.

Proceedings got underway with Informative presentations by Juniper Networks, which concentrated on the evolution of computer networking and, in particular, wireless networking in a data-intensive world.

Van Niekerk spoke on the cyber-threat landscape, highlighting that technology was often implemented without basic security precautions being taken, thus leaving it open for attack by hackers. ‘New technologies emerging under the Fourth Industrial Revolution may have undiscovered security flaws, giving attackers a gap to exploit the situation before anyone becomes aware of the problem,’ he said.

Van Niekerk joined UKZN’s Computer Science discipline in a permanent capacity in December 2017 after being an honorary research fellow with UKZN since July 2014, while still working in industry. He currently lectures the honours Network Security module as well as modules from first- and second-year.