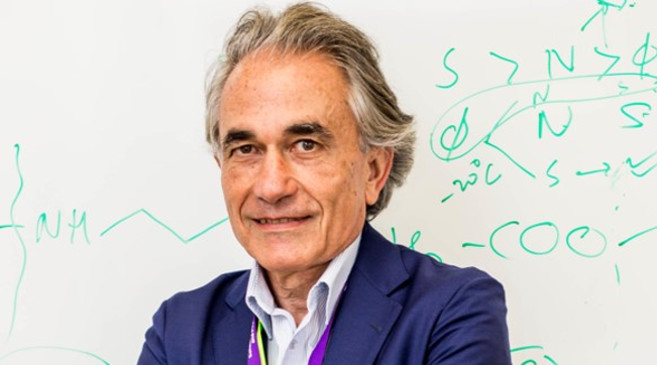 Professor Fernando Albericio is the recipient of the 2019 Murray Goodman Scientific Excellence & Mentorship Award from the American Peptide Society. The award recognises career-long research excellence in the field of peptide science and significant mentorship and training of students, post-doctoral fellows, and colleagues.

The A-rated scientist has featured consistently amongst UKZN’s top 30 published researchers and has published more than 900 scientific papers and co-authored four books. He is Editor in Chief of several scientific journals and sits on the editorial board of others.

Peptides are short chains of amino acids with applications including biomaterials, nanotechnology and drug discovery. A prolific innovator, Albericio has filed more than 60 patents for peptide synthesis approaches and applications. His research has included work on peptides with therapeutic activities, particularly in the field of cancer and infectious disease research. His research group is investigating new methods of drug delivery and diagnostics through peptide synthesis; more than 30 of the commodities developed by the group have reached the market and his work is so extensive that it is possible to say that any peptide synthesised worldwide makes use of technology developed by his group.

Training and mentorship of students has been an important hallmark of Albericio’s work, he has supervised or co-supervised 72 PhD students and more than 70 masters students.

His career has included 12 years as Group Leader at the Institute for Research in Biomedicine in Barcelona and a stint as the founding Rector of Yachay Tech, a university in Ecuador.

Albericio has been deeply involved in efforts to promote entrepreneurship and innovation. He founded and served as the General Director of the Barcelona Science Park, an endeavour that led to the creation of almost 100 start-up companies. He also founded the “Emprendia” Network-Santander Bank; the first Latin American University Network for the Incubation of Companies to create a business network based on research and development results from universities. In South Africa, he is working on the development of BioDurban, a biotechnology incubator, and serves on the board of directors of several companies and foundations.

‘I consider myself as a representative of the New University, which allows me to combine teaching and research with a strong vocation for the transfer of knowledge from such research to society, enabling basic research to become transformative,’ he said.

Albericio joined UKZN in 2012 as a Research Professor after several years of collaboration with researchers at the Institution. One of his major accomplishments at the University has been the establishment of the Peptide Science Laboratory, opened in 2018, the only laboratory in South Africa devoted to the synthesis of peptides with pharmaceutical purposes.