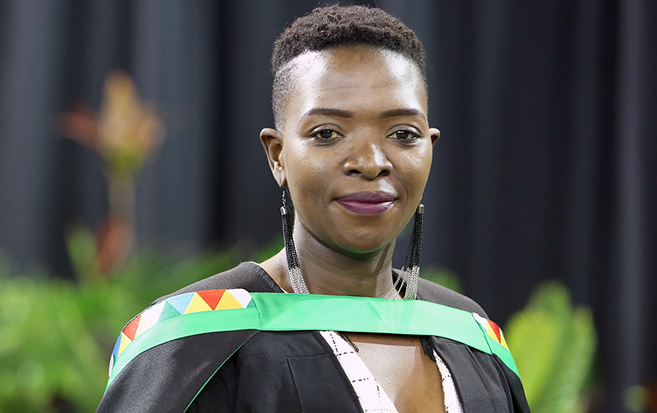 Ms Maureen Nkhathutsheleni Tshikunde graduated with a Master of Science in Agriculture in Crop Science after evaluating elite heat and drought tolerant wheat genotypes based on drought tolerance and water-use efficiency parameters.

Tshikunde, who completed her undergraduate and honours degrees at the University of Venda, chose to study at UKZN because of its sterling reputation and its excellent research outputs. Her love for crops led her to a masters where she investigated an important staple crop, wheat.

‘With the recent recurring drought in South Africa, it is important to identify and evaluate new wheat cultivars that are adapted to the current drought conditions to improve wheat production,’ said Tshikunde. In her study, she noted that the use of drought adapted genetic resources is regarded as the most economic and environmentally friendly approach to mitigate the adverse effects of heat and drought stress.

‘Climate change is real, and I believe that the findings of this study will not only contribute to science, but will also lead to improved wheat yields, which ultimately lead to a better economy for South Africa,’ she said.

Studying towards her masters boosted her self-confidence and developed her skills. The pressure of meeting deadlines while juggling data collection and a literature review was a steep learning curve, as was completing her final write-up while holding down a full-time job at Potatoes South Africa, but Tshikunde persevered.

‘My whole perspective of science has improved,’ she said.

Tshikunde has published an article in the Acta Agriculturae Scandinavica Journal’s Section B Soil and Plant Science on the topic of leaf gas exchange and water-use efficiency of dry-land wheat genotypes under water stressed and non-stressed conditions. Another article on the morpho-physiological traits associated with water-use efficiency in selected dry land wheat genotypes has been accepted for publication in the South African Journal of Plant and Soil.

Tshikunde hopes to enrol in PhD studies in the same field where she can pursue her passion for science. She quoted Sir Francis Bacon as a source of inspiration: ‘Science is but an image of the truth’.

She expressed her sincere gratitude to her supervisors, Professor Hussein Shimelis and Dr Alfred Odindo, as well as Dr Jacob Mashilo, for their belief in her and for making her masters possible. She also thanked UKZN for providing research facilities for her study, and the National Research Foundation for financial assistance.