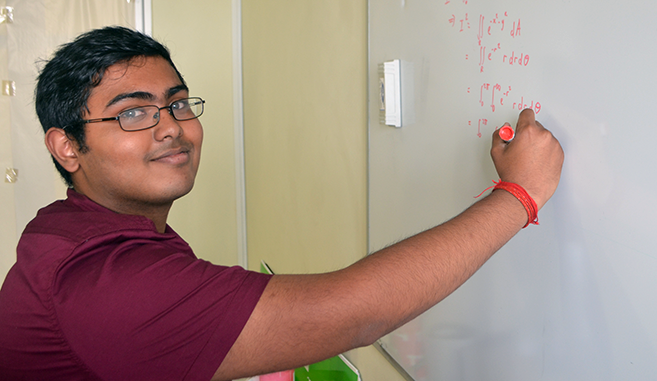 Honours student in Mathematics Mr Kishan Dayaram has been awarded the Zac Yacoob Scholarship for being the best student progressing to an honours degree at UKZN.

The Scholarship is named after Judge Zakeria (Zac) Yacoob, a former Constitutional Court judge and the last Chancellor of the former University of Durban-Westville.

‘Receiving this Scholarship has motivated me to work even harder in the future,’ said Dayaram.

The Glenwood High School old boy elected to study at UKZN because of the quality of the Pure Mathematics degree it offers. His enjoyment of problem solving and the certainty of proofs led him to choose the programme which he excelled at.

After his first year, Dayaram received a Malegapuru William Makgoba Scholarship from the College of Agriculture, Engineering and Science (CAES) for being among the top five undergraduates proceeding from first to second year of study, and also received a CAES award for being the top second- year Mathematics student in 2017.

Dayaram is committed to his studies and the enjoyment he derives has meant he is able to spend most of his time on his academic work, with the exception of the occasional break for a game of chess.

Dayaram thanked his parents for their encouragement and support of his efforts that have enabled him to succeed.

After he has completed his honours degree, he plans to do his masters as he is keen to further his research.