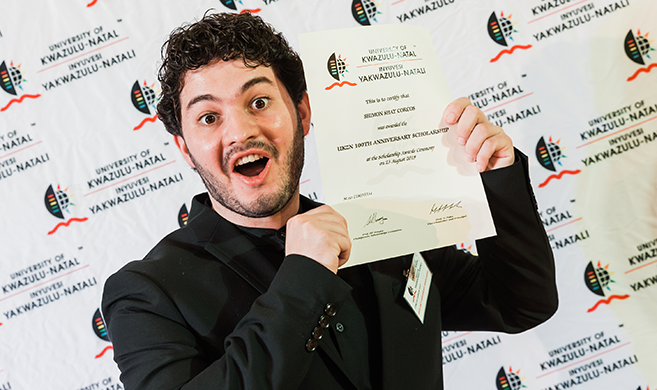 Being one of the top three performing undergraduate students at UKZN has earned Mr Shimon Corcos the University’s 100th Anniversary Scholarship.

No stranger to being an award winner, Corcos’s stand-out academic performances began in Malvern Primary School where he earned the Dux, Good Fellowship and Principal Awards.

At St Benedict’s High School, he was able to pursue his passion and talents which included acting on stage in theatre and music productions, and he won the Dux and the Culture Awards.

After matriculating in 2017, Corcos registered the following year for his Bachelor of Science (BSc) degree at UKZN, where, he says, he was highly impressed by the values, organisational culture and team of world-renowned researchers in the Physics, Mathematics and Computer Science departments.

He is now in the second year of his degree in the mathematics stream with majors in Mathematics and Computer Science.

‘The scholarship is testament to the work and time I invest in my studies - I’m honoured to receive recognition for my continued efforts. Not only does it relieve some of the financial pressures of my family in today’s economic climate, but it also makes me keen to strive for accolades and achievements over and above my current degree,’ said Corcos.

Corcos envisages himself graduating with a PhD and making a valuable contribution to research.

‘What has truly inspired me about the UKZN experience is the enthusiastic attitude and diverse culture of lecturers and researchers in each School and the fluid communication between people of various backgrounds.  It is a happy environment to be in and the lecturers at UKZN embody leadership qualities I aspire to,’ said Corcos.

He thanked his family and also his sponsors for the scholarship awards.

Corcos had this to say to future UKZN students: ‘Together we can look beyond whatever struggles we face and be confident in ourselves – together we can achieve greatness despite all odds!’

Professor Richard Mace of the School of Chemistry and Physics who lectures Physics 113, spoke very highly of Corcos: ‘He portrayed a high level of mathematical and analytical abilities. He was the top student last year and was awarded a Certificate of Merit for his performance. He kept me on my toes with searching and insightful questions. I am sure that he will be very successful in his future studies and I wish him the very best in all his endeavours. Congratulations on your scholarship!’

Said his parents, Mr and Mrs Corcos: ‘Our son Shimon was born determined and embodies all that is good and true.  There is no goal that is too high for him. We are extremely proud not only of his academic achievements but of him as a person, a son, a sibling, a friend and a grandchild. Shimon’s perseverance is inspiring but mostly we admire his humbleness. I know that as much as he is a gift to us as a family, he will be a gift to the community at large as he strives to use his abilities to make the world a better place.’