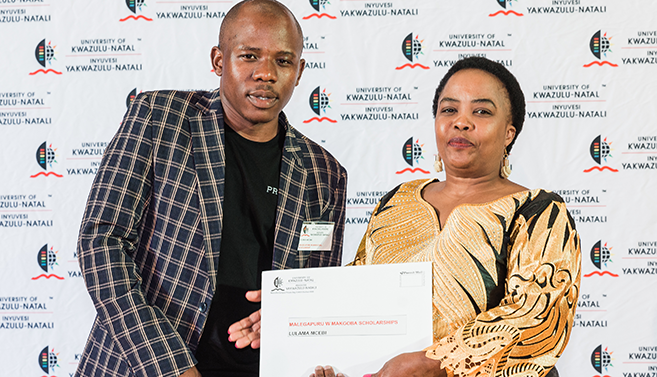 Scholarship Came as a Surprise to Student

‘Receiving the scholarship is a great motivation for me. I never expected anything like this but it motivates me to study harder and to keep doing well academically,’ says Malegapuru W Makgoba Scholarship winner, Mr Lulama Mcebi.

The scholarship is awarded to five top-ranked undergraduates proceeding from first-year to second-year of study in each of the four Colleges at UKZN.

Mcebi is a second-year student in the School of Life Sciences where he is studying a BSc in Chemistry and Biochemistry, a course he chose thanks to his interest in research and discovering new things in the laboratory.

He says he chose to study at UKZN after doing research on universities in South Africa during which he established that UKZN was a leader in the field he was interested in.

Originally from Flagstaff in the Eastern Cape where he attended Mfundisweni Senior Secondary School, he says moving from a rural area to Pietermaritzburg was a huge transition for him, demanding that he adapt quickly to the challenges of meeting new people, navigate a different environment and balance a heavier workload.

He has managed by prioritising his studies while still playing the occasional football game and by spending time with friends.

Mcebi hopes to progress to postgraduate studies to better prepare himself for the workplace.

He thanked his family for their support, and credited Ms Zine Mdleleni and Ms Lusanda Mgudu Njenge of the Intlantsi Foundation for supporting him on his academic journey. He also acknowledged his friends at UKZN, especially Ms Nokuthula Ngcobo, for motivating him to excel, saying his academic success would be impossible without them.