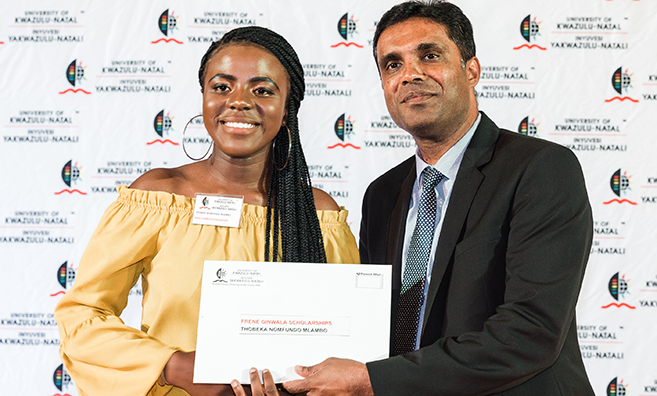 Scholarship Boosts Self Confidence of Student

The Frene Ginwala Scholarship – named after Frene Ginwala, the first Chancellor of the University and former speaker of Parliament – is awarded to top performing Black African women entering UKZN as new undergraduates.

Mlambo said the award also relieved financial pressure on her parents, who support her and her three sisters.

Mlambo attended Empangeni High School, matriculating with an impressive average of 87%. Despite her sterling results, she says the process of applying to universities and finding scholarships was daunting.

She was accepted at several universities for various programmes, including for Medicine in the Western Cape, but chose UKZN because of its fine reputation and the fact it is close to home.

‘I’ve developed a slow brewed respect and deep passion to succeed, which drew me to UKZN.’

Adapting study methods and coping mechanisms in high school to university standards was a challenge, but Mlambo took it one step at a time. She also took advantage of various programmes and support offered by UKZN, such as the Supplemental Instruction programme and sessions with her School’s Academic Development Officer (ADO) to hone her approach to her workload.

Mlambo, who describes herself as creative and someone who loves helping people, chose to study Computer Science and IT in the face of the looming fourth industrial revolution, saying she thought it important to seize the opportunity to prepare for the new horizons.

Mlambo credited her educators at Empangeni High for helping her triumph in the challenging National Senior Certificate exams, while it was thanks to a respected teacher who introduced the skill of coding in her Grade 10 year that Mlambo developed an affinity for it.

‘IT provides something no other discipline does: the freedom to uncover a million solutions for one problem, allowing creativity and the ability to fuse whatever you do with any other field,’ she said.

In addition to her studies, Mlambo plays netball at UKZN, enters coding competitions where her team has excelled, and has also taken up a part-time job at a media company. She uses a diary to prioritise her goals and takes time out to read and relax to combat anxiety.

Mlambo says she is motivated by a desire to make her family proud.

She thanked her high school principal, Mr Sizwe Zwane, for his guidance and support, and her family, particularly her mother, for their care and encouragement. She also thanked the ADO in the School of Mathematics, Statistics and Computer Science for his assistance.

After completing her degree, Mlambo plans to continue to postgraduate studies, and access opportunities to travel and learn from global IT leaders.