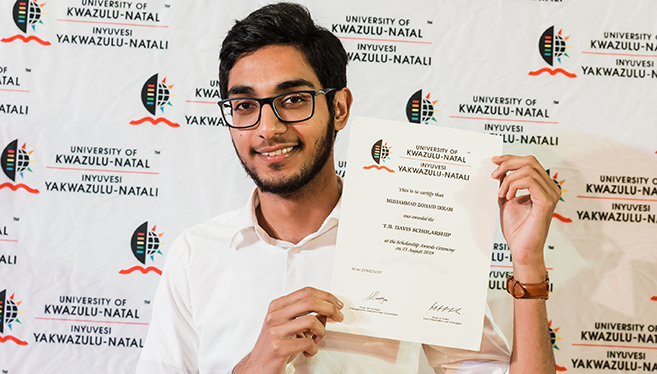 Mr Muhammad Zohaib Ikram’s flair as a youngster for Chemistry and Mathematics and the joy he got out of solving complex problems at high school led him to the field of Engineering.

Now some years later Ikram is an MSc Chemical Engineering student at UKZN who is the recipient of the TB Davis Scholarship.

‘I went to Orient Islamic School in Durban and enjoyed both Maths and Chemistry,” said Ikram. “I chose engineering as I have always enjoyed the challenges that come with Maths and Science as well as solving problems. I also felt there was a lot of opportunity to make an impact to bring about a positive change in society.’

The TB Davis Scholarship was established by the family of Mr TB Davis for top Masters students in Engineering.

Ikram thanked both UKZN and the scholarship sponsors for the award, saying it had motivated him to continue working hard.

‘I value this scholarship highly, not only as a means of financial assistance but also as a token of recognition,’ said Ikram. ‘Being a recipient of this prestigious award is indeed very humbling, and my family and I are extremely grateful. More importantly, it proves I am on the right track in terms of becoming a competent professional and making a difference in the community and in our country as a whole –  which is the ultimate ambition for us all,’ said Ikram.

‘I am extremely proud of my son’s achievement which is richly deserved because he is a hardworking and diligent person. My heartfelt gratitude to the sponsor,’ said Mansoor.

‘I believe that through his sustained efforts, Zohaib will be a valuable asset to the country, both as a potential leader in science and technology research as well as a practising professional engineer,’ said Lokhat.