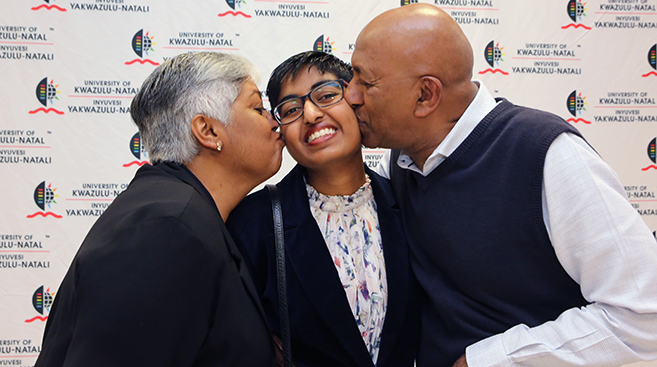 ‘This scholarship means the world to my family and myself.  Studying at an overseas university has always been one of my dreams but due to financial constraints it was a pipe dream. Now I am able to go out and live my dream thanks to UKZN.’

Pather was home-schooled by her father and completed matric doing Cambridge International Examinations. She boasts a large number of accolades and achievements at UKZN and is also one of the top students in the 40-year history of the School of Arts.

She is a talented pianist and has played in a number of concerts at the University of Stellenbosch and venues in Durban.

Pather completed theory and practical grades through the Associated Board of the Royal Schools of Music in London and through UNISA as well as winning numerous musical awards from the South African Society of Music Teachers and at the Queensburgh Festival of Arts.

Fine Art is another of her interests. Two of her works were chosen for display at the UNISA Durban Visual Arts and Multimedia Senior Students Exhibition at the artSpace Gallery in 2014.

‘I have always wanted to study overseas, and especially in the UK. My father is a pensioner so we have relied on merit scholarships and bursaries from UKZN to fund my studies up to now.

‘Without the Emma Smith scholarship I would not be able to attend university overseas. This scholarship has significantly boosted my self-esteem and proves that hard work will open doors.’

Pather is no stranger to challenges. ‘Doing a Classics major, requires one to learn Latin and ancient Greek - I decided to tackle the languages simultaneously! Learning a new language is an extremely challenging task so learning two ancient ones was particularly difficult. I think the key to overcoming challenges, both academic and general, is having a strong support group and building up the determination and positivity to get through it all.’

Pather plans to complete her PhD, enrol for post-doctoral research and lecture at a university. ‘I would like to be involved in and set up outreach programmes with schools and other educational organisations to promote the Classics and literacy, especially in underprivileged areas.’