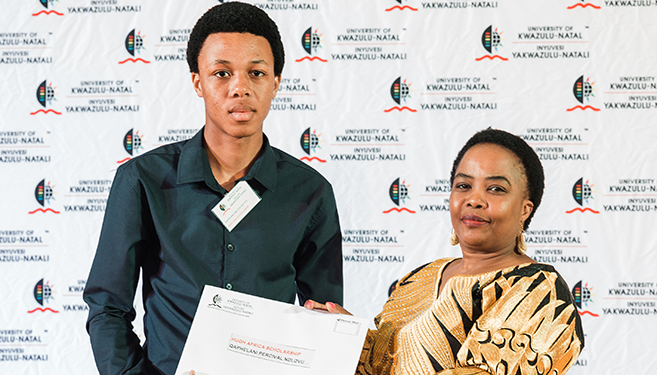 Mr Qaphelani Ndlovu, one of two recipients of the Hugh Africa Scholarship, with Professor Busisiwe Ncama, DVC and Head of the College of Health Sciences.

The scholarship is named after Professor Hugh Africa, a distinguished educationist and former Vice-Chancellor and UKZN member of Council, and the recipient of an Honorary Doctorate from UKZN.

The scholarship is awarded annually to a top first-year student choosing to study Education at UKZN.

Despite Ndlovu, who attended Sister Joan High School, being recognised as the top matriculant in the Ray Nkonyeni Municipality, he didn’t know how he was going to pay his university fees. His father is unemployed while his mother works in a factory earning a minimum wage that barely covers the expenses of running a home.

Ndlovu, who is a traditional healer, said the scholarship meant he could now study without the stress of worrying about fees being paid. ‘Scholarships like these are very important, especially to students who want to further their studies but cannot afford to.

‘I was off school for weeks due to illness and when I returned, I had to catch up which I found difficult because of the workload. I got to the stage where I was ready to quit school because I saw myself as a failure with school not an option for me,’ he said. ‘My parents solved the issue traditionally and I was no longer distracted and eventually became the top student at my school and in the district.’

Ndlovu is now excited about what the future holds. ‘I want to be a teacher but continue studying and travel the world.’

He has this advice for future scholarship winners: ‘Be proud for being top achievers. Do not lose focus and continue striving for the best.’