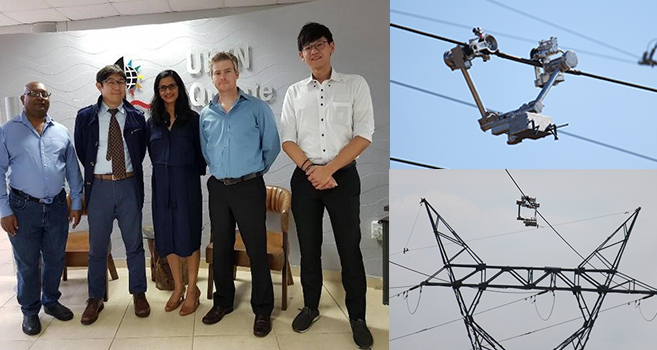 During the visit, the TEPSCO personnel also received training on the use of the robot.

In addition, they had an opportunity to tour the Electrical, Electronic and Computer Engineering laboratory, the Vibration Research and Testing Centre (VRTC), as well as the Smart Grid Research Centre, and the High Voltage DC and AC laboratories, led by Dr Andrew Swanson.

The visit by TEPSCO was preceded by several engagements with Dr Trevor Lorimer and co-inventor, Professor Ed Boje, the last of which involved a demonstration by the inventors of the prototype robots at TEPCO’S Tokyo facility.

The PLIR technology, developed by Lorimer and his colleagues from the School of Mechanical Engineering in collaboration with Eskom, serves to improve current inspection methods of power lines. Overhead power lines are valuable assets that are exposed to harsh conditions. The repair of damage to a power line that spans vast distances is costly, challenging and can have undesirable impact on the grid. Regular inspection of power lines is essential to identify damage early for maintenance planning and tracking fault progression.

The robot, which is controlled from a specially-designed ground station, is designed to withstand the extreme electromagnetic environment around power lines.

Therefore, it can operate on live lines and inspections can be performed without affecting the transmission of electricity. The UKZN researchers are also developing a splice resistance sensor, and a device for sensing the loss of steel core within conductors.

Each robot has four high-resolution cameras built for outdoor lighting conditions and which deliver highly detailed images. The cameras can move around line hardware to obtain different views of the line.

Patent applications were filled for the technology by the UKZN technology transfer office, UKZN InQubate, which is working with Lorimer to commercialise the technology and leverage more developmental funding. The technology has attracted funding of approximately R1.8 million from the Technology Innovation Agency for automation development and building a prototype, as well as from the KZN Department of Economic Development, Tourism, and Environmental Affairs’ Technology Transfer Fund for live-testing of the robot on energised lines.

Lorimer said that he was pleased that the developments on the PLIR will be advanced through the TEPSCO engagement leading to international commercialisation of the technology.

UKZN InQubate Director, Ms Suvina Singh, said: ‘This deal with the Japanese, which is a leader in technology innovations, is validation of the cutting-edge research that UKZN undertakes.’