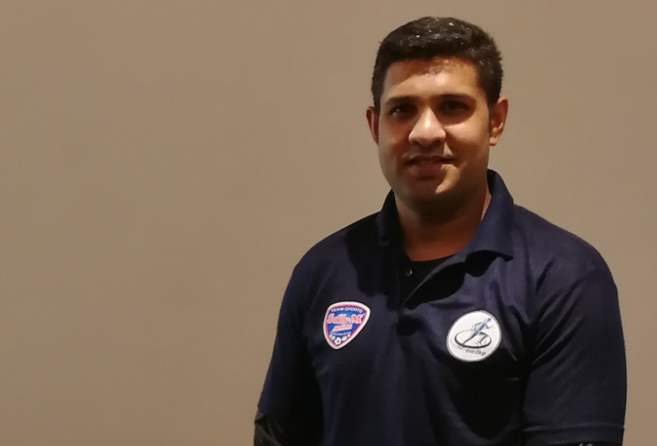 Alumnus and Physiotherapist, Mr Sumeshen Moodley, who recently took up a post to lead the Medical team for Dehli Capitals cricket squad in the India Premier League (IPL).

The IPL will be played over two months. Moodley’s big break came after he was referred to the team’s management by one of India’s top billionaires whom he had worked with from August last year after a knee injury.

Moodley, who has been practising at Durban’s Kings Park for the past 11 years, said his love for sports began growing up in Merebank, where he would spend hours on the road playing different sports with his neighbours.

Although his ultimate goal is to be part of the Olympics, he said having worked as a physiotherapist for South African teams and individual sport stars, it was a matter of time before he reaped the rewards.

His work will also include performing physiotherapy treatments on players and travelling around the country meeting suppliers, team management and players, and planning team and individual programmes.

Moodley has developed a number of treatment programmes and some of them are widely used by other therapists and practitioners.

‘All treatment programmes are individualised using my own techniques. I have developed the most appropriate post op physiotherapy protocol that is now being accepted internationally. Other programmes include how to look after elite sportsmen on a specific level and the Sumeshen Moodley back mobilisations, which l have started teaching,’ he said.

He said his qualification obtained from the University helped him jump-start his career. He believed it laid a good foundation that allowed him to be an independent thinker and challenge the norms. It was the ideal platform to gain the required knowledge, and instilled a work ethic and understanding that things have to be done properly.

He advised recent graduates and students to be humble and be prepared to work 25 hours, seven days a week. ‘Work is not going to come to you, you have to go out there and get it. Be confident in your abilities and have the courage to tell people you are the best and, therefore, they should associate with you. No matter what you do, do it with intense passion and perfection.’

He plans to assist students with extra-curricular experience and skills to help students become more successful. Moodley said after the premier league, there are plans for him to be in charge of the performance of the top athletes in India.

He said another goal includes, at some point, lecturing across different fields from physiotherapy to management ‘having developed strategies that work in practice and in businesses.’