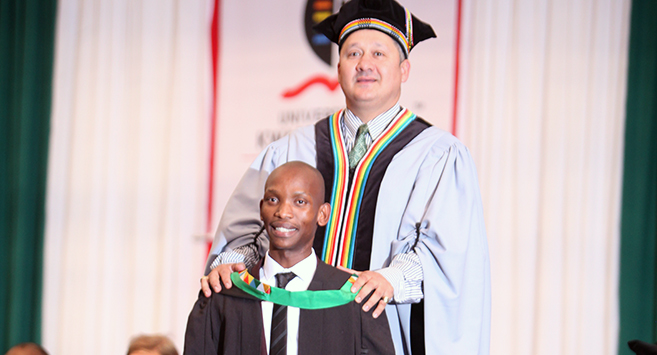 Khuzwayo may at first appear reserved, but he blossoms when it comes to solving mathematical problems. ‘I attended Phindulimi High School where Higher Education seemed unreachable,’ said Khuzwayo. ‘But I had a dream of becoming a UKZN graduate because of its reputation for academic excellence. I realised my love for mathematics relatively late in life but since then, I have never looked back.’

Khuzwayo started at UKZN in the Science Access programme which equipped him with the necessary academic skills to tackle his undergraduate studies in Applied Mathematics, Mathematics and Statistics. Owing to this excellent foundation, an abundance of God-given talent, and determination and hard work, he emerged from his honours degree at the top of his class.

Khuzwayo has now registered for an MSc research degree in Pure Mathematics – the only South African student on UKZN’s Pietermaritzburg campus to do so.

Khuzwayo said his parents and grandmother were his pillars of strength during difficult times. When asked what advice he had for his fellow students, he said: ‘Live today as if there is no tomorrow.’