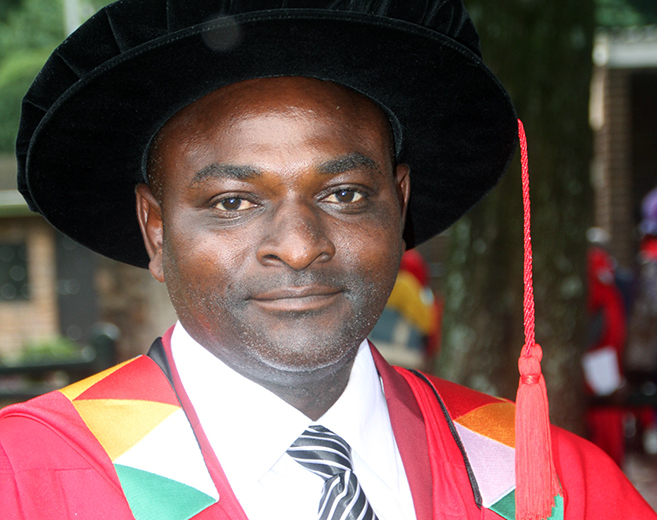 Dr Eliud Kongola graduated with a PhD for his research on breeding for durable resistance to Cercospora leaf spot diseases in groundnuts.

PhD for Investigations into Groundnut Disease

Dr Eliud Kongola graduated with a PhD through the African Centre for Crop Improvement (ACCI) at UKZN after doing research on breeding for durable resistance to Cercospora leaf spot diseases in groundnuts (Arachis hypogeae L) in Tanzania.

He enrolled with the ACCI to add plant breeding to his knowledge of agronomy and plant protection, referring to them as the three pillars of crop science.

Kongola got inspiration to do the research after seeing the increasing incidence of the disease over time, and the resultant reduction in groundnut cultivation. He was interested in whether there was a lack of improved groundnut varieties resistant to biotic and abiotic stresses, or if those growing the crop did not adopt available varieties because their preferences were not taken into account when these were developed.

‘The use of resistant or tolerant cultivars with stakeholders’ preferred traits is the more effective, economical and environmentally friendly control measure when compared to chemical control,’ said Kongola.

He hopes that through incorporating his discoveries, additional programmes working to improve this crop will enhance groundnut production towards improved food and nutritional security, income and livelihood of farmers and other stakeholders in the groundnut value chain.

Kongola believes that consideration of these stakeholders’ constraints and preferences will help breeders improve production while keeping in mind farmers’ needs. He also wants to see sources of genes and gene action governing inheritance of yield and disease resistance being applied to breeding programmes for improving either yield and/or Cercospora leaf spot disease resistance.

Kongola indicated that his identification of the trait association could assist in shortening the breeding period.

During his research, Kongola was surprised to find that more than 90% of the farmers in his study area had seen the disease in their fields but took no action in controlling it, mistakenly thinking that the signs of disease pointed to crop maturity. Kongola recommended that those growing these crops consult agricultural experts when encountering unfamiliar symptoms in their crops, and said agricultural research departments should supply their results to extension officers to link new technologies to the end users.

Applying innovation and hard work, Kongola overcame the challenges of low rainfall and a lack of irrigation systems to complete his research, and recalls travelling long distances on a motorcycle to visit his trials.

Following completion of his PhD, Kongola now leads a project on seed production and delivery systems on the Harnessing Opportunities for Productivity Enhancement (HOPE) of Sorghum and Millet under ICRISAT. He also now heads a department of Research and Innovation at his research station.

He hopes to start a seed business focusing on climate-resilient dryland cereals and legumes, since these are not readily available and because the growing effects of climate change are already affecting food security in many countries.

'Growing these crops is the way to go in climate change mitigation,' he said.

Kongola thanked his parents, Francis and Mary Kongola, for providing him with an education; his wife for taking care of the family during his studies; his supervisors, Professor Rob Melis and Dr Julia Sibiya for their guidance; and classmates for their support.

He also acknowledged the Alliance for a Green Revolution in Africa for funding his studies through the ACCI.