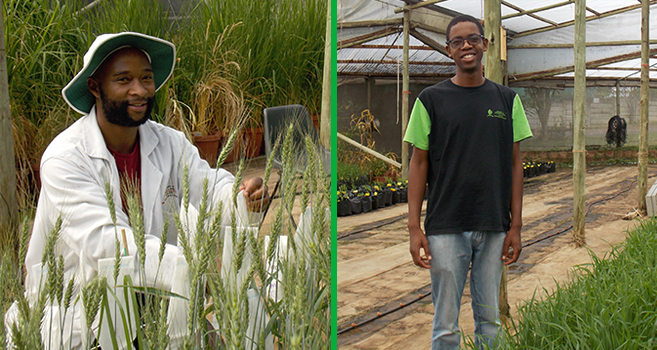 Duma, the recipient of a scholarship from the South African Cultivar Technologies Agency (SACTA) that will enable him to pursue PhD studies, conducted his MScAgric research on the topic of optimising post-release sugarcane variety evaluation in the South African sugar industry.

He has developed a number of research papers and presented the results at the Southern African Plant Breeding Symposium in 2018, the 2018 South African Sugar Technologists’ Congress, UKZN’s 2018 Postgraduate Research and Innovation Symposium, and the 2019 Combined Congress

Duma evaluated GxE interactions of a set of sugarcane cultivars across coastal, midlands and irrigated regions; identifying high yielding genotypes as the best performers across the regions. In his work, two mega-environments were also identified.

He recommended that to achieve optimal tons of estimated recoverable crystal sugar per hectare, the best resource combination was four testing replications, five crop selection cycles and more than 10 locations. This recommendation will allow breeders to determine the best yielding and high quality genotypes across the selection sites of the South African Sugarcane Research Institute (SASRI).

Duma is doing PhD studies on the pre-breeding of wheat for drought tolerance and nitrogen use efficiency. ‘Doing a PhD will expose my expertise to international standards and I will be able to make positive development impacts in Agronomy and in food security for the country,’ said Duma, who plans to expand his research and teaching skills.

He thanked his supervisor, Shimelis, and co-supervisor Dr Sanesh Ramburan for their guidance and support, as well as UKZN and SASRI for providing the facilities needed for his research.

Dryland production of wheat, the most important cereal crop after maize in South Africa, is threatened by recurrent drought leading to low profitability for farmers.

As part of a wheat research group at UKZN collaborating with the Agricultural Research Council’s Small Grain Institute to develop drought-tolerant wheat varieties by developing breeding populations, Shamuyarira developed superior drought-tolerant bread wheat families for further screening in advanced generations. His work has formed the basis of a number of research papers for publication in journals, and he presented his research at the 2019 Combined Congress.

Shamuyarira thanked the staff and the 2017 cohort at the African Centre for Crop Improvement, and his supervisors Shimelis and Professor Toi Tsilo for their support and encouragement in his studies. He is now pursuing his PhD, conducting further investigations into the drought tolerance and carbon sequestration of bread wheat.