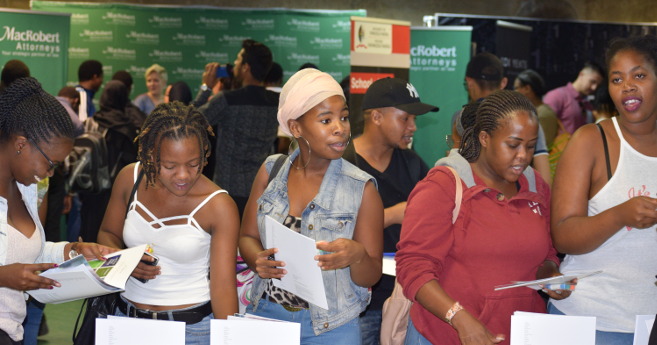 Law students finding out about their career options at the Law Professions Day.

Law students from the Pietermaritzburg and Howard College campuses took full advantage of the opportunity to engage with potential employers at the annual Law Professions Days.

Hundreds of students interacted with representatives of some of the top law firms in South Africa, including Adams & Adams, Baker and McKenzie, ENS and Bowman and Gilfillan as well as non-profit organisations such as Legal Aid.

They visited their stalls, collected pamphlets handed out by the law firms, listened to briefings and used the opportunity to apply for jobs.

‘After regretting attending Law Professions Day for the free stuff that firms gave out last year, I decided to change tack this year. I invested a lot of time in preparing my CV which I made copies of and carried along with my academic record. I also attended a legal workshop hosted by Aspen Pharmacare for practical experience and used all the knowledge to showcase that I am a top candidate,’ said Thorne.

While third year student Ms Zandile Zulu whose passion to pursue law at UKZN was motivated by the College of Law and Management’s PR Unit schools liaison visit to her high school, Vukile High School in Stanger in 2016 says planning ahead is the only way she does things.

‘I am very interested in environmental law because of the impact that climate change has on the environment. I am grateful for platforms such as these as they inform us about which employment opportunities are available to us in the areas we are passionate and interested in,’ she said.

Garlicke and Bousfield’s Human Resources Manager, Ms Jeanette Swart said she always enjoy personally interacting with UKZN law students as the talent they see and recruit gets better every year.