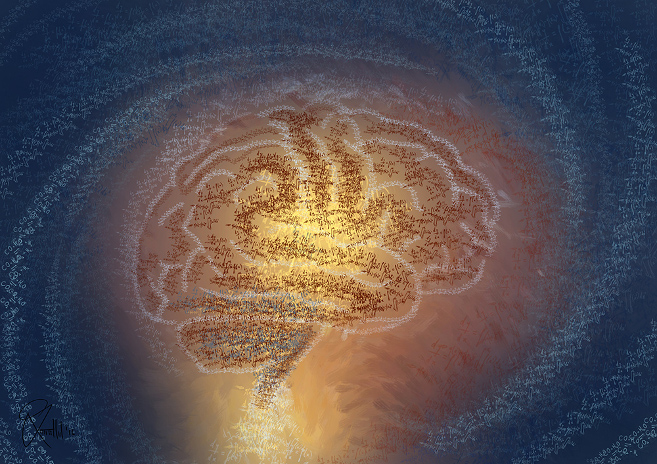 Professor Randhir Rawatlal has taken the world by storm with his “Equation Art” pieces. The above artwork is titled A Thought is Worth a Thousand Pictures.

UKZN Academic Leader of Research at the School of Engineering Associate Professor Randhir Rawatlal has taken the art world by storm with his paintings some of which use scientific equations or even computer code to create art pieces illustrating topics in the fields of engineering, philosophy and mathematics.

Rawatlal says ‘Equation Art’ is a new technique he used to illustrate some of the creative writing he was doing as an "escape" while finishing his PhD thesis. However, it soon took on a life of its own with a number of people showing interest.

‘I serialised the text and mailed it out anonymously. In a short time, I had a following from readers from countries around the world,’ said Rawatlal.

Explaining the technique he said: ‘I draw or paint out an equation and turn that work into a brush and then use the equation-brush to paint a scene related to phenomena in science.’

Rawatlal said he was not aware of anyone else using fractal paintings with equations and code.

‘I started trying to learn better techniques and once posted a question on Fine Art America asking for tips on visual nomenclature, as I called it, to help get more concepts across. The conversation around this question exploded and became the most widely read discussion on Fine Art America with contributions from artists from several countries.’

His drawings have also found places on UKZN campuses, the Clinical Psychology Department at King Dinuzulu Hospital and with University staff members.

His latest painting titled: A Thought is Worth a Thousand Pictures has pride of place in the office of UKZN Vice-Chancellor, Dr Albert van Jaarsveld.

Describing the painting, Rawatlal said it was a partial-fractal image. ‘If you look closely, you will see the painting is actually the result of smaller paintings which are equations.’

He said many of his paintings were related to topics he taught. ‘I do it partly because I think students sometimes lose the sense of wonder in the race towards an exam. It would be enough for me for a student to look at a painting, recognise some elements that relate to their studies, and think: “Perhaps there’s more to my studies than meets the eye”.

‘I’ve produced other “equation art”, together with energy drawings of yoga poses. On the cultural side, I’ve produced scenes from stories in Vedic mythology. All my paintings were created from trying to illustrate some of the creative writing I produce. Currently I am interested in producing paintings for people who are trying to personally develop certain qualities or overcome issues. I create a scene in which a person is interacting with him or herself in some way to improve a quality or overcome an issue,’ said Rawatlal.

He said he wanted to share this technique with others and work on collaborative projects to produce artwork for charitable purposes.