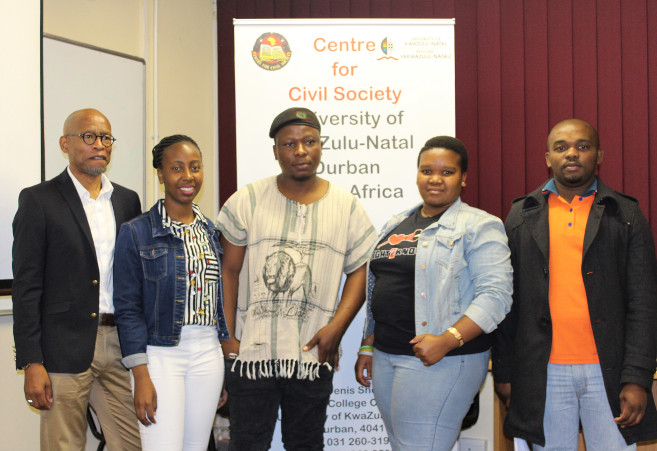 The Centre for Civil Society (CCS) within the School of Built Environment and Development Studies hosted the Young Civil Society and Contemporary Issues event recently on the Howard College campus.

It was organised by Ms Eliza Solis-Maart and facilitated by Ms Lerato Malope and Mr Nduduzo Majozi who are all based at CCS on research projects.

The event had four sessions focusing on different topics.

One of the speakers Mr Thobani Zikalala, a political sciences student, stressed the importance of such workshops because he believes most people especially Blacks are not equally informed when it comes to pressing social issues. ‘Black people should consider engaging in such conversations because they tend to be the ones who are affected and suffering. It would be a great conversation especially if everyone concerned is involved,’ he said.

Another student Mr Sizwe Mthembu focused on the issue of feminism and its relation to society. ‘It is always an issue especially for men to be feminists in society. We need to discuss these issues out in the open to create understanding. We are all human and it’s our choice about how we look and feel about some issues,’ he said.

Amongst the other speakers was Dr Koyi Mchunu of the School of Built Environment and Development who spoke about access to land in terms of citizenship, a need for creditable leadership in land development and humanity declines over land debates. CCS Community Scholar Ms Philisiwe Mazibuko of the Right2Know Campaign presented on capacity Building: Media Freedom and Diversity. The final session was presented by Mr Gilbert Zvaita from the International Centre for Non Violence. His session focused on structural violence in Africa.