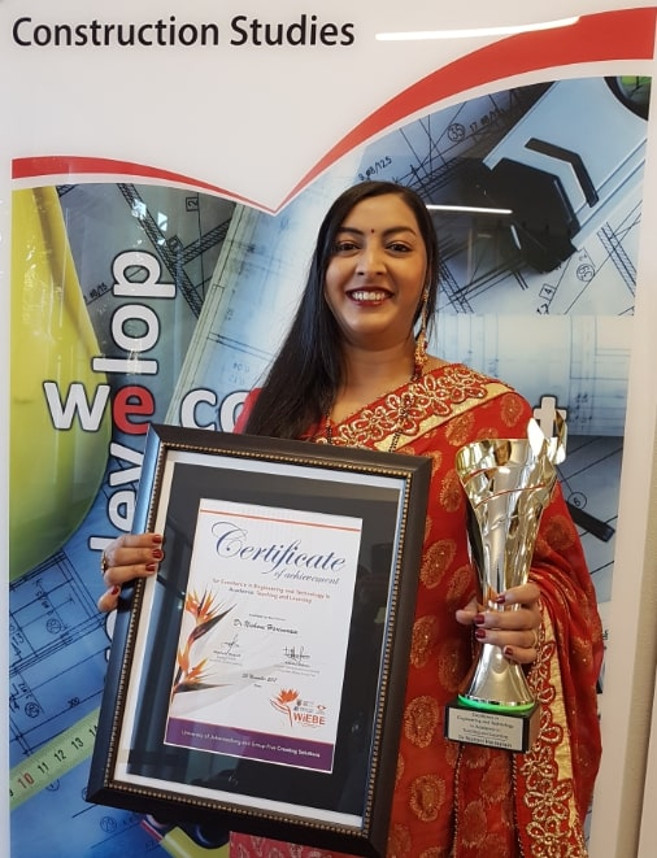 Top Academic Honoured for Contribution in Engineering and Technology

UKZN academic, Dr Nishani Harinarain, has been awarded the Certificate of Achievement for Excellence in Engineering and Technology in Academia: Teaching and Learning, from Women in Engineering and the Built Environment (WiEBE) in partnership with the Department of Public Works, the University of Johannesburg and construction company Group Five.

The programme was initiated in 2006 in response to the lack of a national, coherent programme that supports both students and professional women in the Science, Engineering and Technology (SET) sector in South Africa.

WiEBE has four target audiences: professional engineers and built environment practitioners; current students; secondary school learners; as well as the community. Every year, the programme initiates interventions to strengthen these areas and attain tangible objectives within each one.

Harinarain, a senior lecturer in the Construction Studies Discipline, was the first PhD graduate in the discipline from UKZN. She was awarded the University’s highest award for an academic, the Distinguished Teacher’s Award in the School of Engineering in 2015, and more recently scooped the Best Lecturer and Top Researcher awards in construction studies.

While women remain under-represented within the SET sector, Harinarain stands as an extraordinary woman in science who continues to rise and be an inspiration for other women.

‘I am overwhelmed and deeply humbled by the acknowledgement,’ said Harinarain. ‘To be recognised by industry and WiEBE and to receive such a prestigious award is certainly an achievement. Organisations such as the WiEBE provide a critical platform for supporting and engaging women in engineering and the built environment,’ she said.