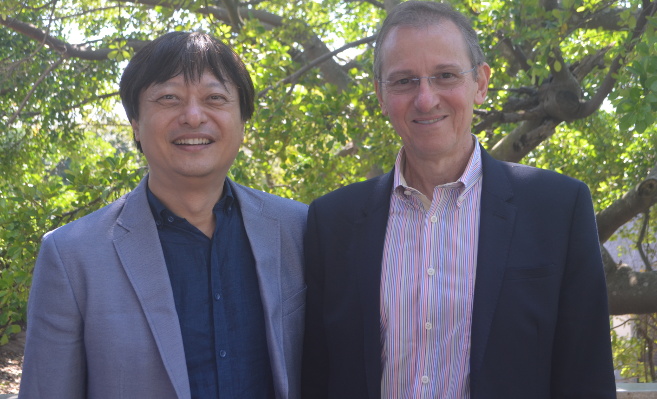 A delicious breakfast and quantum computing are perhaps at the opposite ends of the scale but they combined exceptionally well at the first “data@breakfast” initiative held on the Westville campus.

Brainchild of UKZN Pro Vice-Chancellor for Big Data and Informatics Professor Francesco Petruccione, the event was the first of a monthly series envisaged by Petruccione to act as a platform to discuss ‘topics at the forefront of big data, artificial intelligence, quantum computing, machine learning and more.’

The inaugural talk was presented by UKZN Honorary Professor June-Koo Kevin Rhee, who addressed issues on data and computing for the 4th industrial revolution. Rhee is Director of the Quantum Computing Information Technology Research Centre (ITRC) at KAIST, a public science and engineering research university in Korea. ITRC dedicates itself to developing quantum computing technology that provides the computability required for human-level artificial intelligence (AI).

Fortified by coffee and an array of tasty breakfast treats, Rhee’s diverse audience - drawn from across the University and local industry – were taken on a fascinating journey through the futuristic world of quantum computing and artificial intelligence.

The term, “Fourth Industrial Revolution”, refers to the fourth major industrial era since the initial Industrial Revolution of the 18th century. It is characterised by a fusion of technologies that is blurring the lines between the physical, digital, and biological spheres, collectively referred to as cyber-physical systems. It is marked by emerging technology breakthroughs in a number of fields, including robotics, artificial intelligence, nanotechnology, quantum computing, biotechnology, the Internet of Things, the Industrial Internet of Things (IIoT), fifth-generation wireless technologies (5G), additive manufacturing/3D printing and fully autonomous vehicles.

Rhee said that quantum machine learning (QML) research was in a very early stage globally. Moving forward, quantum computing represented a transition from science to engineering. He explained that the most anticipated applications for quantum computing were in the field of quantum simulation, quantum artificial intelligence (where the properties of problems were well matched with quantum computing), and design optimisation in fields such as engineering and medicine. He said the most critical application would be RSA encryption (RSA is one of the first public-key cryptosystems and is widely used for secure data transmission).

Big Data and Informatics, which offer computing solutions for the future, is one of the four research flagships identified as critical to UKZN’s new strategic plan. The others are Social Cohesion (addressing inequality and promoting nation building), African Health (saving lives), and African Cities of the Future (most liveable cities).