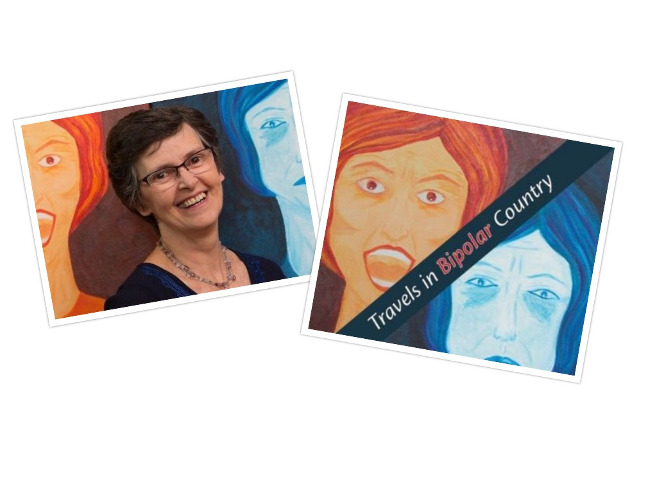 UKZN graduate, Merryl Hammond, who recently published a memoir of her journey with bipolar disorder.

Merryl Hammond graduated as a nurse and midwife from the University of KwaZulu-Natal (UKZN) in 1978, perfoming several psychiatric rotations as part of her initial and postgraduate nursing training; never dreaming she would one day become a mental patient herself.

Bipolar disorder (formerly called manic depression) would however rudely interrupt her at the age of 51.

‘I had no idea that my turn would one day come; that I would cross the thin line between mental health and mental illness; that my brain would misfire and render me absolutely powerless,’ she says.

In her 2018 memoir, Mad Like Me: Travels in Bipolar Country, she writes: ‘Bipolar caused me to disappear from the stage of my own life for two full years, from the age of 51 to 53. I was exiled, lost, shocked, confused and ashamed.’ (Hammond, 2018:13)

‘What an upsetting thing it was to be diagnosed with bipolar disorder!’ says Hammond. ‘I honestly thought I was “above” mental illness; somehow “better than that”.’ No such luck. She has since learned that mental illness is everywhere: about one in five people will experience a mental illness each year, and one in three will over the course of a lifetime. And yet the topic remains shrouded in stigma and shame. And people with symptoms and their families often overlook the problem, or deny its existence, because of the stigma. As a result, millions of mentally ill people around the world languish undiagnosed and untreated, suffering unnecessarily, their human potential wasted. And their families and caregivers suffer unspeakably, too.

A real tragedy is that in most cases the symptoms of mental illness first appear in adolescence or early adulthood. Many cases are overlooked because parents dismiss the symptoms as hormonal changes and “normal moodiness” of the teenage years, but there’s a huge difference between a mopey youth and someone in real mental distress who needs and deserves psychiatric help. Other cases are missed because youth move away from home – to attend university, for example – and their new friends and contacts have no prior knowledge or “baseline” against which to measure abnormal moods or behaviour. As well, many people – both those experiencing the symptoms and their loved ones and contacts – choose denial rather than facing up to the uncomfortable reality confronting them. ‘Maybe if we just ignore it, it will go away?’

No, it almost certainly won’t.

‘That’s why I have now decided to do everything I can to bring the issue of mental illness to the attention of the public. It’s really a human rights issue. I deliberately titled my memoir Mad Like Me, thereby “owning” the pejorative label “mad”, in the same way that other marginalised groups have proudly claimed labels like “gay”, “trans”, and so on. It’s time to bring mental illness out of the closet!’ she says.

Hammond used all the academic skills she developed as a graduate from UKZN (B. Soc. Sc. Nursing 1978, B. Soc. Sc. Hons. 1980), Unisa (Dip. Adv. N. Sc. 1984) and the University of the Witwatersrand (MA 1982, PhD 1989) for her book. She kept copious notes and documented everything she experienced as a bipolar patient. She has graphically captured the sights, sounds and other-worldly experiences she lived through to help readers understand what it truly feels like to live with bipolar disorder.

After a few years of dramatic mood swings and two psychiatric hospitalisations, she finally achieved mental stability again, and can now devote herself to helping fellow bipolar patients and their families better cope with the disorder.

‘Now that I’ve fought my way, step-by-step, back to mental health, I’ve made it my mission to share my story, and to encourage others to share theirs, so that together we can break the stigma surrounding mental illnesses of all kinds, in all age groups,’ Hammond says. ‘Will you please join in this effort?’

Her memoir, Mad Like Me: Travels in Bipolar Country is available from: