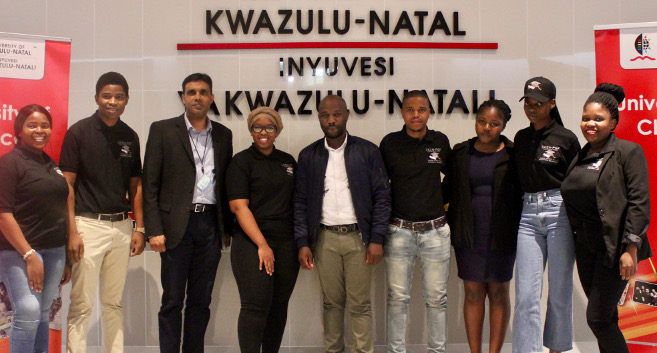 Attendees at the launch of the UKZN Postgraduates Forum (UKZN-PGF).

Wednesday, 17 October 2018, marked the official launch of the University of KwaZulu-Natal’s Postgraduates Forum (UKZN-PGF) which was unveiled on the Westville campus.

Mr Sphelele Khanyile, Chairman of the Forum, outlined the objectives of the forum, saying amongst its objectives is the promotion of enrolment of postgraduate qualifications; research and innovation; as well as the creation of a culture of active citizenship through the formation of conducive platforms for the discussion of issues of national importance. Lastly, the forum aims to champion the interests of postgraduates and represent their consolidated view.

Professor Deresh Ramjugernath, Deputy Vice-Chancellor: Research, who was a keynote speaker at the launch, expressed his appreciation of the forum and his willingness to work hand-in-hand with it. In his speech, Ramjugernath touched on the importance of research quality and socio-economic impact, saying these are important measures where the University’s performance is concerned.

Ramjugernath also outlined the University's strategic outlook of increasing the number of postgraduate enrolments which received an overwhelming applause from both postgraduates and final-year undergraduates as the students interpreted this as meaning that they would receive the necessary support they require in furthering their studies. This was also positively received by the Forum.

Mr Mndeni Mkhize, Youth Development Manager at the eThekwini Municipality, who is a UKZN alumnus, welcomed the formation of the organisation, saying the formation of the Forum is long overdue. He said the challenge of unemployment amongst graduates must also be part of the Forum’s scope. He encouraged the production of postgraduates who will be employers and entrepreneurs which will in turn have a positive impact on unemployment, inequality and poverty. Mkhize expressed his as well as his office’s desire to work with the Forum.

Forum Secretary - Sandile Mthiyane, encouraged all postgraduates to join and affiliate with the UKZN-PGF.

The forum is available on social media as UKZN Post-Graduates Forum on Facebook and as ukzn pgf on Instagram. Email the Forum at ukznpgf@gmail.com.