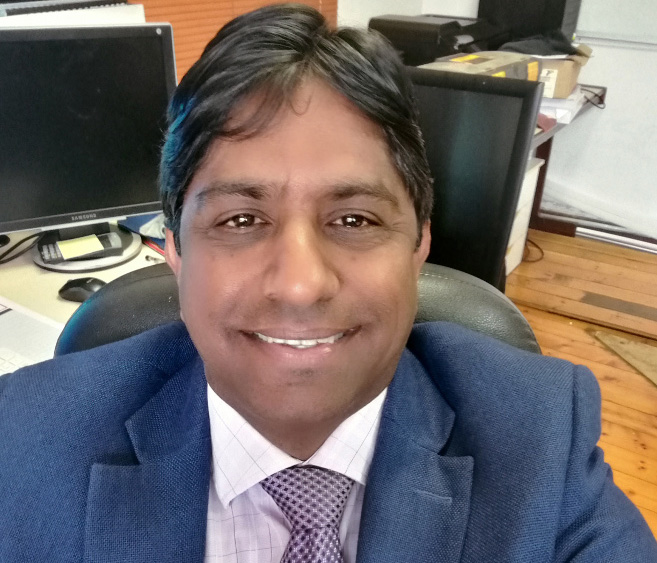 Dr Sudan Hansraj, UKZN Mathematician who was recently appointed to serve a third term on Umalusi.

Dr Sudan Hansraj, a senior lecturer in the School of Mathematics, Statistics and Computer Science (SMSCS) at UKZN, has been appointed to a third term on the Assessment Standards Committee of the Umalusi Council for Quality Assurance in General and Further Education and Training.

The Assessment Standards Committee conducts the process of standardisation and moderation of internal assessment and examination results for all qualifications that Umalusi certifies. With the support of the Quality Assurance of Assessment Unit, it also provides guidance on the standard and quality of assessments for qualifications, assessment standards and statistical research.

Hansraj, who has been at UKZN in the Discipline of Mathematics since 2002 where he was an academic leader for four and a half years, has served various terms on Umalusi from 2002 to 2006, 2014 to 2018 and currently from 2018 to 2022. He has served on the UKZN Institutional Forum, including as Chairperson. He has also been a member of the UKZN Senior Appointments Committee and Senate.

His technology-rich approach to teaching includes websites and short videos, and has included the development of a write-in workbook for first year engineers to assist weaker students. The high school study material he has produced over the past 18 years has been read by more than one million learners.

Hansraj is passionate about Mathematics education, has written several articles on the topic and has been invited as a plenary speaker at teaching conferences throughout Africa. He has organised conferences on the teaching of university mathematics and the role of decolonisation, and has been invited to conduct a workshop with University of Zululand’s Mathematics Department to improve undergrad pass-rates.

Hansraj’s research involves classical general relativity and its extensions, about which he has authored around 40 research articles, with a number appearing in top ranked journals in Mathematical Physics. He collaborates with scientists locally and overseas and has presented conference papers at about 40 international conferences, as well as at numerous local meetings. His current area of scientific inquiry is the Lovelock and Einstein-Gauss-Bonnet higher curvature theory of the gravitational field.