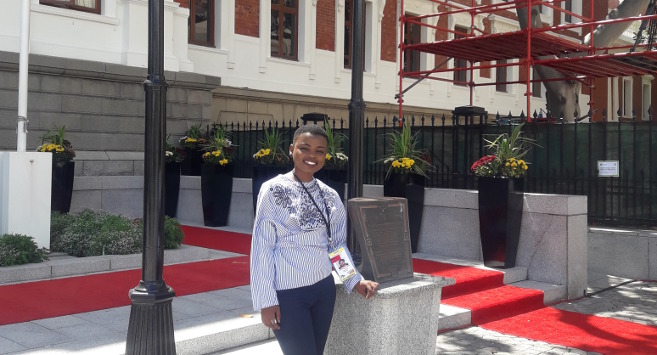 UKZN’s Dr Nomfundo Mahlangeni at Parliament Buildings in Cape Town ahead of the State of the Nation Address.

Post-doctoral researcher in the School of Chemistry and Physics (SCP) at UKZN Dr Nomfundo Mahlangeni attended the State of the Nation Address (SONA) in Cape Town on the invitation of Parliament.

One person from each province who it was felt had made a significant impact on society was invited.

‘It was truly an honour to be invited as a prominent guest at the State of the Nation Address by the Speaker in the National Assembly, Ms B Mbete, and the Chairperson of the National Council of Provinces, Ms T R Modise,’ said Mahlangeni.

Mahlangeni made headlines in 2017 when she received her PhD in Chemistry at the age of 28 after overcoming tremendous odds that included coming from a single-parent home of four children. Parliamentary representatives called Mahlangeni’s story inspirational, impacting positively on the lives of many South African women.

Mahlangeni said being able to speak about science to prominent officials was a privilege. She had also raised the issue of funding and how African contributions to Science have been considerable but lack further guidance to enhance and implement findings for the benefit of communities.

‘It was very encouraging to hear President Cyril Ramaphosa is prioritising job creation for unemployed youth, and improving of the position of Black women and communities in the economy,’ said Mahlangeni.