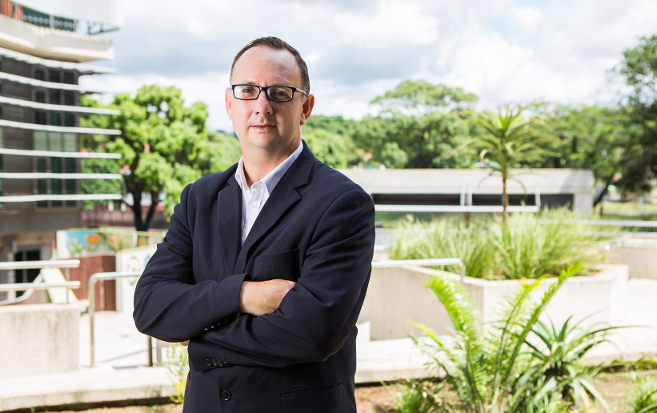 The increased supply of safe water in a rural KwaZulu-Natal community has significantly reduced the chances of children contracting parasitic disease, according to the results of research by UKZN and the Africa Health Research Institute (AHRI) scientists published in the respected eLife journal.

The study in the uMkhanyakude district in northern KwaZulu-Natal demonstrated that increased provisions of safe water over a period of seven years led to an eight-fold decrease in the risk of children becoming infected with urogenital schistosomiasis, also known as bilharzia. This impact is substantially greater than previous results have suggested.

Schistosomiasis is a chronic parasitic disease caused by blood flukes of the genus schistosoma. These parasites are transmitted by snails that live in freshwater environments contaminated by schistosoma eggs. Urogenital schistosomiasis affects both men and women who can pick up the infection from agricultural, domestic and occupational activities that expose them to infected water.

‘Recent work estimates that sub-Saharan Africa could lose US$3.5bn of economic productivity every year as a result of schistosomiasis and soil-transmitted worm infections, which is comparable to the 2014 ebola and 2015 zika epidemics,’ said lead author, UKZN’s Professor Frank Tanser of the Africa Health Research Institute. ‘One of the main interventions to control schistosomiasis is the provision of safe water to limit contact with infected water bodies and break the cycle of transmission. But to date, a rigorous measure of the impact of safe water supplies on schistosomiasis is lacking.’

To understand this impact, Tanser and his team undertook comprehensive demographic and health surveys over a seven-year period in AHRI’s population intervention programme area in uMkhanyakude in northern KwaZulu-Natal. The area encompasses a large rural population.

An average of 10 267 households took part in each of these surveys which asked participants to specify the most often used source of drinking water in their homes. Households were deemed to have access to safe water if they reported their most common source to be piped water delivered directly to the home or from a public tap.

At the end of the survey period, the researchers then took urine samples from primary schoolchildren to determine the prevalence of urogenital schistosomiasis, and found that 353 participants out of 2 105 – or 16.8% – had the infection.

The research took advantage of the large variations in the scale-up of piped water provision across space and time to capture the overall population-level impact of piped water on risk of infection. The results demonstrated that children living in communities with a high coverage of piped water were eight times less likely to be infected compared to those living in areas with little or no access to piped water.

‘While there are some limitations to these findings, our approach provides a rigorous quantification of the overall impact of piped water on the risk of urogenital schistosomiasis infection,’ said Tanser. ‘The continued expansion of safe water supplies and decreasing prevalence suggest that the disease is retreating and could even be vulnerable to eradication in similar settings, as long as strategies for controlling the infection are introduced and maintained.’

The paper ‘impact of the scale-up of piped-water on urogenital schistosomiasis infection in rural South Africa’ can be freely accessed online at https://doi.org/10.7554/eLife.33065 Contents, including text, figures and data, are free to reuse under a CC BY 4.0 licence.

eLife, an open access journal, aims to help scientists accelerate discovery by operating a platform for research communication that encourages and recognises the most responsible behaviours in science.

It is supported by the Howard Hughes Medical Institute, the Max Planck Society, the Wellcome Trust and the Knut and Alice Wallenberg Foundation. Learn more at https://elifesciences.org

The Africa Health Research Institute (AHRI), one of South Africa’s largest independent, interdisciplinary research institutes, aims to become a source of fundamental discoveries into the susceptibility, transmission and cure of HIV and TB and related diseases, seeking ways to improve diagnosis, prevention and treatment. AHRI’s principal funders are the Wellcome Trust and the Howard Hughes Medical Institute. Its academic partners are the University College London and UKZN.