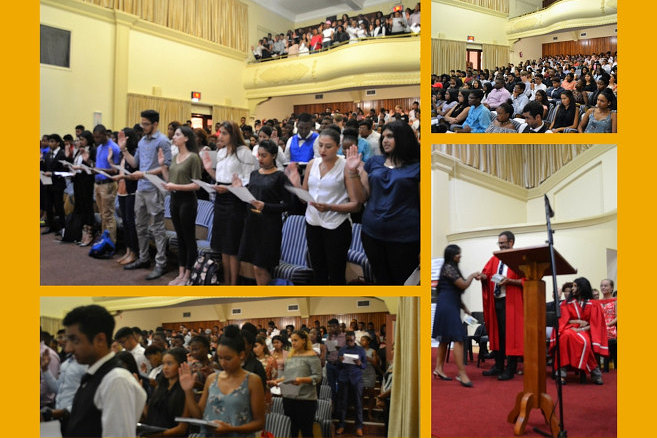 Students committed to a career in Law.

Conduct themselves with decorum, respect fellow students and staff, and act with integrity - that was the commitment made by first year students at the School of Law’s annual pledge ceremony on the Howard College campus.

At the ceremony, keynote speaker Professor Karthy Govender spoke about positive thinking, virtues and discipline, the concept of indifference and the imperative of ethical behaviour, while encouraging students to contribute towards the realisation of the goals set down in South Africa’s Constitution.

‘Think about the Grade 1 class you were in and how many of your classmates have the privilege of sitting in a Law school that is among the best in the country,’ said Govender. ‘I urge you not to stay in your social and racial groupings during your time here but rather interact with other groups as it exposes you to what is happening in the world. This profession is very competitive so you have to think about where you want to be in 15 years and work towards getting there.’

The oath taking was presided over by the Dean and Head of the School of Law, Professor Managay Reddi, and students signed the pledge to record their commitment to the profession with each person receiving a copy of the South African Constitution.

Students Ms Farrah Alysed and Ms Noxolo Ndlovu said the pledge was motivation for them to strive for the best.

‘Taking the pledge and hearing the inspirational address is confirmation I made the right choice in choosing Law as my career. I cannot wait to go out into the world and make a difference,’ said Alysed.

Ndlovu says she is honoured to be part of a law school with such a great tradition of producing the best legal minds in the country.

‘I am excited about taking this journey and look forward to the knowledge I will gain through my time at the Law School and using it to make people’s lives better,’ she said.

Said fellow student Mr Macalen Chetty: ‘Taking the pledge during our first year of studying is very symbolic because it sets the tone for the values that we have to uphold throughout our legal careers. Lawyers play a very important role in the country’s justice system and it is important for them to do so with honour and integrity,’ he said.