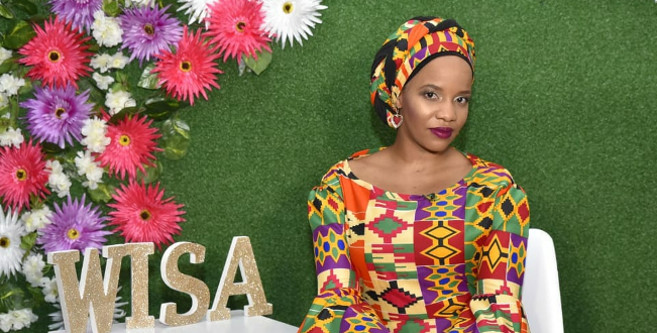 Sikhosana is one of three doctoral candidates to be awarded the honour for women working in the fields of Science, Technology, Engineering and Mathematics where female participation is low.

Sikhosana, who is based in the Astrophysics and Cosmology Research Unit (ACRU), is conducting PhD research involving investigations into diffuse radio emission in galaxy clusters; work that she hopes will improve current scaling relations of the diffuse emissions and theories around the evolution of galaxy clusters. Sikhosana is passionate about empowering future generations in the sciences and hopes her research will inspire more young South African women to consider a career in Astronomy, which has few female scientists.

‘It is humbling to know that my hard work is being recognised at a national level,’ she said, adding, ‘The scholarship includes traveling grants, equipment grants and enables other activities that contribute towards improving my research. Most importantly, a public platform like this gives us a chance to inspire women to join the science field and stay in it.’

Named one of the College of Agriculture, Engineering and Science’s (CAES) Wonder Women in Science in 2017, Sikhosana has received a number of accolades over the course of her academic career, including the Hope Scholarship from the Association of South African Women in Science and Engineering (SAWISE) which enabled her to travel to Princeton University for a month in 2014 as well as a full undergraduate scholarship from the Square Kilometre Array (SKA). She is also a member of the Golden Key International Honour Society at UKZN which enabled her to attend the International Scholar Laureate Programme hosted in Washington DC and New York in 2013. In March 2018, she presented her work at the American Astronomical Society’s ‘SnowCluster 2018: The Physics of Galaxy Clusters’ conference in Utah. She also presented her research at the ‘Hot spots in the XMM sky: Cosmology from X-ray to Radio’ conference in Mykonos in 2016 and was awarded the top prize for her oral presentation at the CAES Postgraduate Research and Innovation Symposium in 2015.