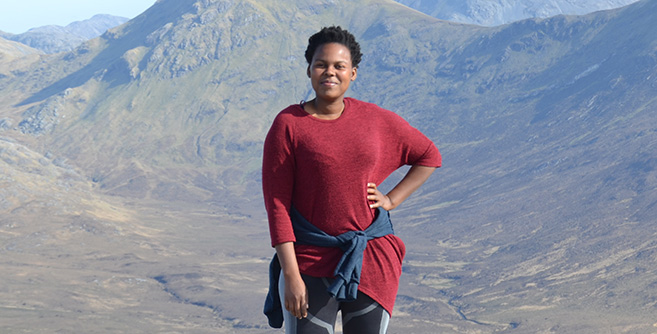 Ms Simangele Msweli at the Connemara Mountains in the Republic of Ireland.

Talent Equity and Excellence Scholarship for Aspiring Academic and Biologist

Ms Simangele Msweli from the School of Life Sciences is the recipient of the Talent Equity and Excellence Acceleration Scholarship, which is awarded to Black South African students who have achieved academic excellence and aim for a career in academia.

‘I feel very honoured since this award recognises the commitment I’ve put into academia and identifies me as a future academic,’ said Msweli.

The scholarship has, she says, relieved the pressure of finding funding to enable her pursuit of an academic career in ecology, especially in the current unpredictable state of education and research.

‘I now have an increased chance of realising my dream to be a pollination biologist and contributing to human capital development and knowledge building in South Africa,’ she said.

The high achiever has received a number of awards over her academic career, including the Mandela Rhodes Scholarship and Abe Bailey Travel Bursary. In June 2018, she was named one of the Mail&Guardian’s 200 Young South Africans in the Science and Technology category in recognition of her efforts to ensure that science influences policy and that it (science) reaches non-scientists in a comprehensible manner.

Having grown up close to the isiMangaliso Wetland Park, which provided Msweli with a bursary for her undergraduate studies at UKZN, Msweli has harboured an interest in the natural world since childhood.

She has travelled extensively, giving academic presentations in Australia, Uganda, the United Kingdom and China, as well as participating in the United Nations Convention on Biological Diversity (UN CBD) in India, Mexico, Canada and South Africa.

She has participated in Mandela Rhodes leadership summits, field courses with the Southern African Wildlife College, Leiden University and the University of Utrecht, and has assisted in numerous university initiatives including the School of Life Sciences’ (SLS) 2018 Research Day and the College of Agriculture, Engineering and Science Royal Show stands.

Msweli has also assisted as a Supplemental Instructions (SI) co-ordinator for the SLS and School of Mathematics, Statistics and Computer Science (SMSCS).

During her studies, she was part of the Golden Key Honour Society for over three years; the Black Management Forum in 2015; and the executive board of the South African Youth Climate Change Coalition (SAYCCC).

Msweli has pioneered passion projects in the field of education in Africa. She has been involved in projects such as the Uplift Youth in Africa group, which mentors and gives academic guidance to schoolchildren in Africa.