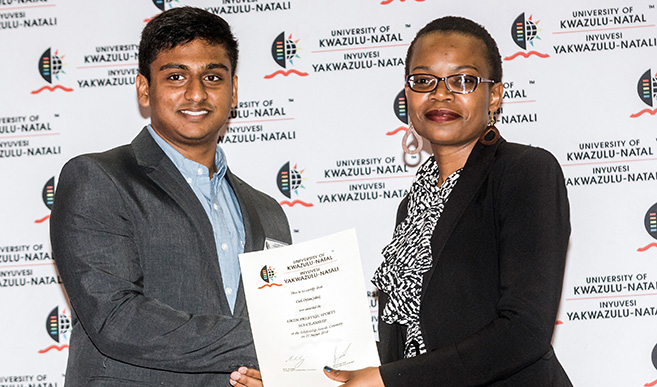 Mr Carl Jairaj, a first-year in Civil Engineering student, is the recipient of a UKZN Prestige Sports Scholarship in recognition of his cricketing prowess.

‘This scholarship represents all the time, effort, sacrifices and dreams I have had; proving that being an all-rounder is attainable and that my hard work has not been in vain,’ said Jairaj.

Jairaj went to Westville Boys High School and cricket played a formative role in his life. On Saturdays, he would engage in mini-cricket games in his earlier years as a child until the sport became a part of his daily routine after his father recognised his natural talent at the age of 11.

‘I love cricket as a team sport because you establish a network of people you can always reach out to. You also learn how to be a team player as well as team dynamics,’ he said.

Jairaj has played for the KwaZulu-Natal provincial under 13, under 15 and under 17 teams. He has also captained the WBHS 1st Cricket Team to several inter-provincial victories and has competed in the annual Michaelmas Cricket Week tournament three times. Jairaj attended the annual Cricket South Africa training camp twice and his school cricket career culminated in him making the KZN under 19 team in which he participated in the prestigious Coca Cola Khaya Majola Cricket Week.

Jairaj, who is also passionate about drawing and sketching, selected a university where he could pursue both his interest in engineering and love of cricket, choosing UKZN as it is amongst the top engineering institutions in the country. He was excited by the prospect of playing with the University’s strong, diverse cricket team.

‘Within this team sport, you are expected to perform at your individual best, so cricket has helped me set goals, work hard and deal with the highs of success as well as disappointment of failure,’ he said, adding that good time management is essential to keeping a balance between his studies as well as sport commitments. He hopes to one day play for a local franchise or county in the United Kingdom. He also hopes to have his own business.

Jairaj gave credit to his school teachers as well as cricket coaches, Mr Van Jaarsveld and Mr Malcom Reeders; his private coach, Mr James Pentz, for instilling a sense of leadership. He credited the WBHS cricket family, headed by Mr Sharmin Naidoo, for its phenomenal coaching, particularly that of Mr Fabian Lazarus, and KZN under 19 coach, Mr Mduduzi Mbatha and KZN Mynahs coach, Mr Wayne Scott. He also acknowledged his family for their sacrifices in supporting both his education as well as sporting aspirations.