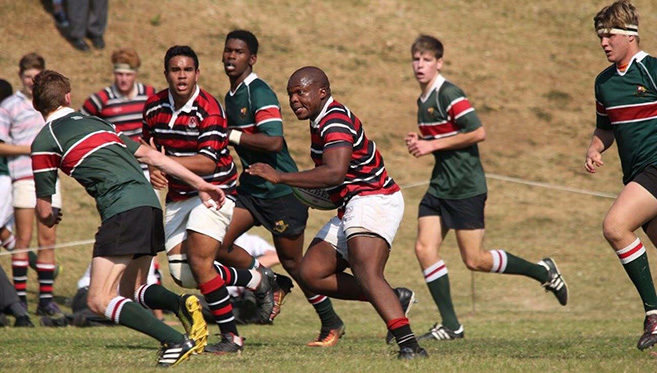 Mr Phelelani Zuma (fourth from left) in action on the rugby field.

Mr Phelelani Zuma, a player for the Sharks under 19 rugby team and first-year Property Development student, is the recipient of the UKZN Prestige Sports Scholarship awarded for outstanding achievement in sports at international, national or provincial levels.

Zuma, who is originally from Pietermaritzburg where he attended Maritzburg College, is making a name for himself on the rugby scene having played for the Sharks under 18 team at the Coca-Cola U18 Craven Week and Academy Week for two consecutive years in 2016 and 2017. He is currently playing in the Sharks U19 Currie Cup setup.

He hopes to progress to a professional rugby career in South Africa or abroad, but is also working to achieve a fine balance between his sports commitments and his Property Development academics. He hopes the latter may open doors into a career in construction management or quantity surveying.

With an interest in construction and a fascination with beautifully constructed buildings, Zuma said the Property Development course at UKZN was recommended to him as being one where he could explore those interests. Studying at UKZN also presented him with the opportunity of studying closer to home and continuing to play with his familiar team.

He dedicates his evenings to his academics after playing sports every afternoon. ‘It’s challenging, but if you put your mind to it then it is possible,’ he said.

Zuma said the scholarship has lifted an enormous financial burden from his parents’ shoulders and has made it possible for him to further his studies and improve his sporting skills at the same time.

He thanked his parents for their support, prayers and belief in him. He also said his teammates and friends have played a vital role in getting him to where he is today, and thanked God for blessing him with the talent he has and the physical ability to play successfully.