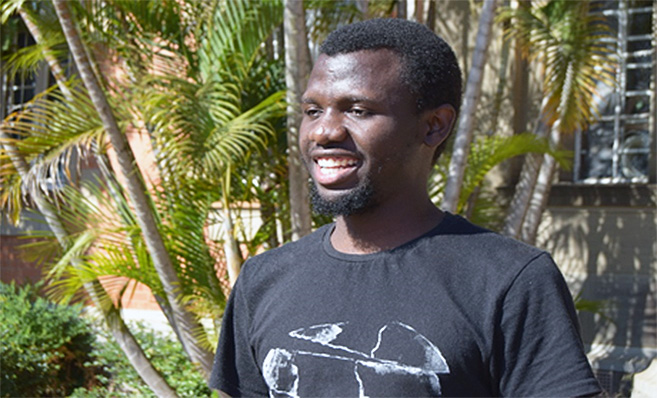 Mr Ntobeko Cele, a former Menzi High School learner who grew up in one of South Africa’s biggest townships UMlazi.

He has always heard of the University of KwaZulu-Natal (UKZN) and was actious to finally join this university after he completed his matric. Ntobeko enrolled for a BSc Comuter Science and IT.

It was during his second year that Ntobeko received the Malegapuru W Makgoba Scholarship and things changed for the better for him. This is when he realised his efforts were not in vein. However, he still sees lot of room for improvement academically and personally so in the near future he plans on consulting more people who can help him be the best version of myself within the institution.

Ntobeko expresses a lot of gratitude for the opportunity his been afforded and wants his funders to be reassured that he will not take it for granted. We asked Ntobeko what inspires him to continue with his career choice he said ‘I have a few but one that stands out is from my very first practical in my first year.

My COMP100 lecturer, the wonderful Mrs Rosanne Els had us “programming” robots to navigate a route on the lab floor and everyone was just so excited. I can’t describe the feeling but I knew then I had made the right choice coming to UKZN, I felt at home.’