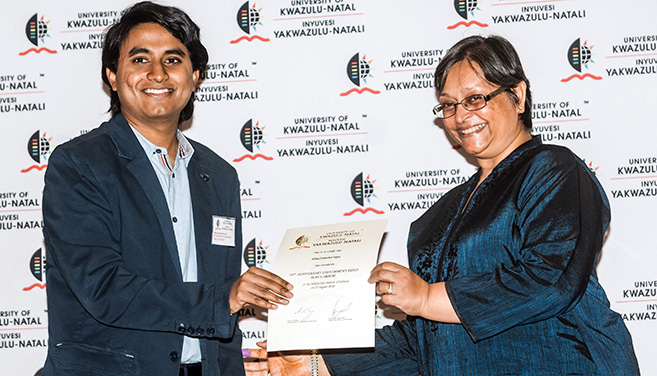 UKZN annually hosts a prestigious awards ceremony to celebrate academic excellence and achievements of students across all Colleges.

For Sapry, studying through UKZN was an obvious choice for his academic career. ‘Having attended school in Durban, UKZN was a logical choice. Whilst in high school, I was trained for the International Physics Olympiad by UKZN lecturers. I saw the quality of training we received and this convinced me that UKZN offers excellent tertiary education programmes,’ he said.

Upon completing his matric, Sapry studied a BSc Medicine degree for two years at UKZN’s Nelson R Mandela School of Medicine. However, upon realising that the career path “was not for him”, he switched to a BSc degree majoring in Applied Mathematics and Physics.

Throughout his academic career, Sapry has sought to excel in all academic fields. During his second year as a BSc Medicine student, he achieved an Exemption with Credit and has also kept the same academic streak in his current degree where he has received a Certificate of Merit for his studies.

Sapry said receiving the scholarship will motivate him to not only complete his degree in record time, but also motivate him. ‘The scholarship alleviates financial strain and allows me to continue to study towards my degree. It is also an acknowledgement of my results. This is motivating. It is reassuring to know that switching career paths can be successful. It motivates me to complete my degree on time, with a good average and continue to study further towards my PhD. It is also a motivation to improve myself not just academically,’ he said, thanking the scholarship donors for acknowledging his hard work through his scholarship.

‘I would like to thank the donors/founders and the University for acknowledging excellence by awarding top performers the scholarship. I also urge the donors to continue to award this scholarship,’ he said.

Sapry’s parents, Mr Pravesh and Mrs Shamela Sapry, expressed pride in their son’s achievement, also expressing gratitude to the scholarship donors as well as UKZN staff and management for encouraging him to excel.