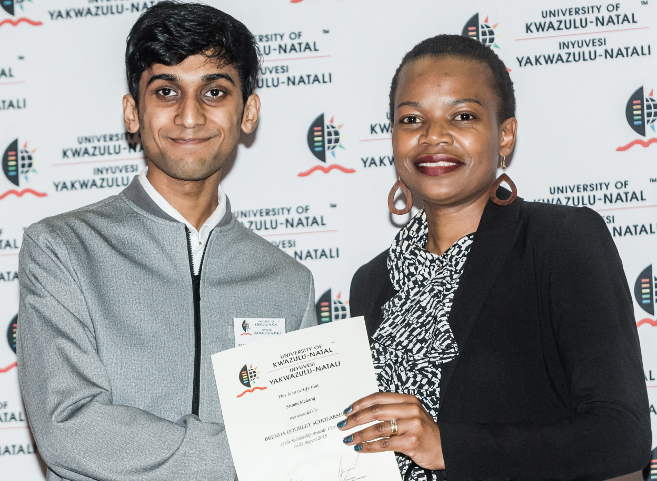 The Brenda M Gourley Scholarship is awarded to top performing undergraduate students at the University of KwaZulu-Natal (UKZN) in recognition of exceptional academic performance.

Mr Sriram Maharaj, second-year Bachelor of Commerce in Accounting student, made the cut in the 2017 academic year when he was ranked the second best student at UKZN, thus earning him this prestigious undergraduate scholarship.

The scholarship is named after the first female Vice-Chancellor of the erstwhile University of Natal (now University of KwaZulu-Natal) and it is befitting that it is awarded to a BCom Accounting student this year as Gourley is a qualified Chartered Accountant and an Emeritus Professor of Accounting and Finance. Noting the significance of the award Maharaj said, ‘I feel honoured to be associated with this world renowned academic and to receive an award of this magnitude in her honour is very inspiring.’

Maharaj dreams of making a meaningful and positive contribution to the business world and is confident that his studies in Accounting will enable him to realise his vision in the near future.

While his studies are progressing fairly well thus far, he admits that the workload has increased in the second year but with support from his parents and two siblings, he is managing.

For the Durban born Maharaj, this award did not come as a surprise as he matriculated as DUX of Westville Boys’ High School in 2016. Some of his academic achievements include being placed fifth in KwaZulu-Natal on the basis of his matriculation results. While at UKZN, he has also been awarded the Pius Langa Scholarship during his first-year of study. He has received Dean’s commendations in every semester thus far and he has earned certificates of merit in nine different modules. He is also a recipient of the South African Institute of Chartered Accountants (SAICA) Award for being the top ranked first-year BCom Accounting student for the 2017 academic year.

‘My family are both proud of my achievements and thankful for the financial assistance it brings with regard to funding my studies,’ he said.