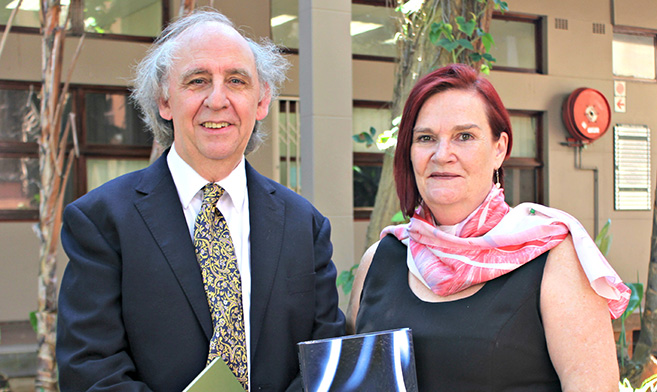 Professors Donal McCracken and Ruth Teer-Tomaselli with their book Media and the Empire.

Professors Ruth Teer-Tomaselli and Donal McCracken of the Centre for Media, Communication and Society (CCMS) are editors of the acclaimed Media and the Empire book.

This volume on print and broadcast media in the 19th and 20th centuries highlights the pivotal role that the media played in the establishment and maintenance of imperial power. The media bolstered both the ideological and financial objectives of the empire in a myriad of overt, covert, and downright scandalous ways.

From jeopardising the introduction of wireless telegraphy in order to maximise the financial gains of the investors of under-sea cabling, to newspaper proprietors cashing in on the thrilling, wonderful (and sometimes fabricated) adventures of war correspondents in exotic lands, the media has had a constant background influence in the public’s perception of the empire.

By covering diverse topics from Anthony Lejeune’s radio talk-show “London Letters” – which supported the Allies by boosting morale and providing a link between soldiers fighting abroad and their families during both World Wars, to the complete subversion of imperial influence – as in the case of the proliferation of diverse media platforms being used by migrant communities in Britain as a means to promote “colonisation in reverse”, the book hints at the politics, suspense, and intrigue of both the print and broadcast sectors.

This book was originally published as a special issue of Critical Arts. It is available for purchase from all major online and in-store book retailers.