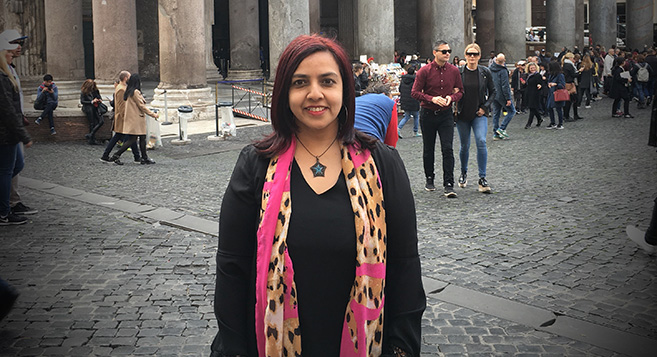 Professor Maheshvari Naidu, seen in Rome, where she delivered a public lecture at the American University of Rome in Via Roselli.

Professor Maheshvari Naidu, who was recently promoted to full Professor in the School of Social Sciences gave a public lecture to faculty staff and students at the American University of Rome (AUR) in Via Roselli, Rome.

Naidu was hosted by the Classics and Heritage Department at the Graduate School of AUR. Her lecture was based on her study of Robben Island Museum and Interpretive Site.

Robben Island, situated 8km from the mainland off the coast of Cape Town is one of those sites that is evocative of a painful past and ‘few places are as electrified with symbolic power and political contestation as Robben Island,’ she says.  The declaration of Robben Island, a former prison site as a National and then a UNESCO Heritage Site in 1999 is testimony to the political and cultural potency of the site.

Naidu said that prison tourism is not new and that Thana-tourism or tourism of dark and traumatic spaces has gained much currency and popularity. ‘However, Robben Island is one of those spaces that simultaneously occupies two different places at once, it is a space of pain but it is also a space of hope, it is simultaneously evocative of the past as well as that of the future,’ explained Naidu.

The specific drawcard for most visitors to Robben Island was that it was “home” to Nelson Mandela for 27 years. Moreover, it has featured in much of the discourse around nation building and a meta-narrative for South Africa.

Naidu’s interest and study was from the perspective of anthropology of tourism and heritage construction and staging and performance.

‘Performance’, can best be understood as any behaviour that is ‘twice-behaved’ or ‘restored’, said Naidu. ‘This allows a point of insertion for viewing the constructed touristic experience such as the one at Robben Island to be read within the repertoire of ‘performance’ as we look to see what is being performed and inscribed, and how it is being experienced.’

Quite often tourist products (such as the Robben Island Tour) attempt to offer a master narrative of national heritage and identity. ‘What the products perform to an audience and how the audience “experiences” these are important in allowing us to understand what “face” we are offering up to the global tourist market,’ said Naidu.