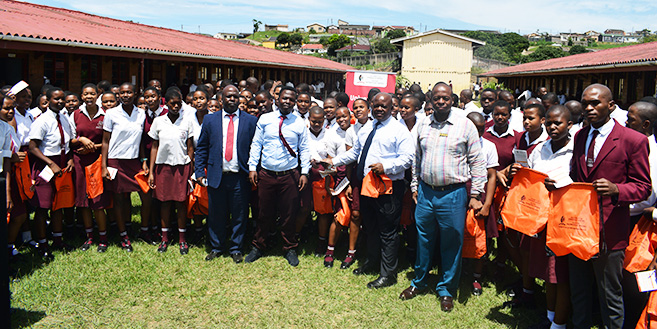 This Valentine’s Day, falling in love with Maths was the focus as Financial Accounting lecturer Dr Msizi Mkhize and his son Mr Siphesihle Mkhize, a Master of Commerce student, recently took their passion for the subject to Embizweni High School in Umlazi Township where they celebrated the Love Maths Day with scores of pupils.

The event, attended by approximately 1 180 learners, was held to create a positive attitude towards the Mathematics discipline among high school pupils.

Dr Mkhize, from the School of Accounting, Economics and Finance (SAEF) started this initiative at Inanda Comprehensive High School in 2017. After the event, he shared his enthusiasm at being able to work with his son for the first time saying he aims to see the programme expand to other parts of KwaZulu-Natal with the support from the Department of Basic Education.

The father and son duo provided the learners with an entertaining presentation that left them amazed at how Maths can be used in their daily lives and in other subjects such as history and geography. Dr Mkhize gave one of the learners, Ms Hloniphile Buthelezi, a R50 note in which she used to describe the factors and multiples of 50, while mentioning all the properties of a quadrilateral rectangle. With the R50 note bearing the face of former President Nelson Mandela, she gave her peers a short history lesson of how Mandela was imprisoned for 27 years on Robben Island, keeping the money as a monetary reward.

Mkhize said getting positive feedback from learners, parents and teachers inspires him to give back to the community by instilling a passion for Maths in the hearts and minds of young people.

‘After adopting Inanda Comprehensive High School, the schools pass rate increased to 90%. I was able to move one of the learners Mathematics pass mark from 10% to 66% in the 2017 final examinations. The student is now doing a Bachelor in Commerce in Accounting at UKZN Westville campus,’ he said.

Siphesihle said he enjoyed working with his father adding that this was a one of a kind experience that he will never forget, ‘My father has always been in love with Mathematics from a very young age and would teach us (as his children), how to find different ways to solve problems allowing me to love the subject in my primary and high school years,’ he said.

Guest speaker Mr Vukile Buthelezi, Umlazi District’s Mathematics Advisor at the Department of Education, said the presentation was motivational for the pupils adding that he hopes it will change the negative attitude they may have towards mathematics.

‘If you are used to playing with something at a young age and when it comes time to do it properly it becomes easy. So if Dr Mkhize can play around with Maths the way he does, then it is possible for us to pass it at the end of the year,’ said Grade 12 learner Mr Ayanda Memela.