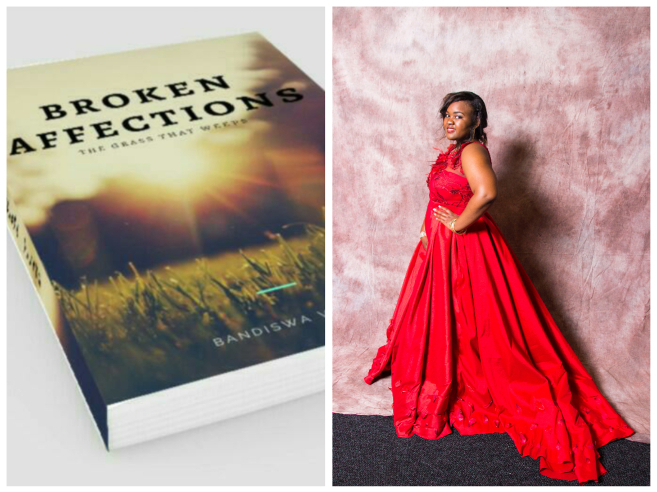 Ms Bandiswa Vilane with her book titled: Broken Affections: the grass that weeps.

The self-published work titled, Broken Affections: the grass that weeps, is a story about creativity, revealing a lot about Vilane’s inner self. ‘I believe every book, even if not based on life experiences, contains aspects of the writer’s very being,’ she said.

Vilane says the story is told through the eyes of a psychologist who goes through life in the western world facing challenges as a young Black woman trying to find her place in society.

Explaining the main character, Vilane said: ‘The woman in the book is like a sakura flower planted in winter and expected to blossom when it can only blossom in spring. Our foundations as individuals alone make us different from each other, and therefore, being channelled and having grown in a certain environment makes you neon in another.’

Vilane, who grew up in Swaziland, says she has always loved creative writing, reading, public speaking and debating.

‘I fell in love with words at a very young age and as I grew older I discovered words are a part of me and I wanted to share that with everyone.’

Vilane said she first tried blogging and has written playwright stories on Facebook. She had a Diary ya Zamo series which, she says, did well.

‘I had so many crazy plots in my head. I could actually put a whole book together, so I began to write books,’ said Vilane.

Released through B Matsenjwa Publishers, Vilane hopes the slices of her own life experiences in the book will result in readers finding something of themselves in her work. ‘Besides the great storylines, I believe books are therapeutic so to know that every page can possibly heal someone is more than enough for me,’ she said.

Vilane plans to release a poetry book later this year and another novel next year, and many more after that.

She belongs to an organisation known as: I’m An African which can be found on Facebook or at www.africanyouthmovement.com

Copies of the book can be purchased for R200 on Amazon and are also available in Swaziland bookstores.