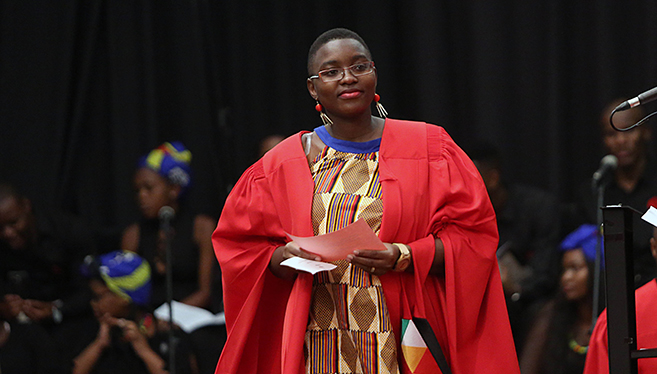 Dr Justine Nasejje walks across the graduation stage to get her PhD in Statistics.

Ugandan-born Dr Justine Nasejje graduated with a PhD in Statistics for research that has drawn international attention in her field and earned her invitations to a number of scientific meetings, including one in June in the United States.

Nasejje investigated the properties of random survival forests, with her results providing insight into the non-parametric methods used for time-to-event data. These insights could be of value to health practitioners for use in their daily practices, where time-to-event data is useful, for example, in studies on cancer prognosis, treatment and prevention. She compared these to classical semi-parametric regression methods for analysing time-to-event data via a simulations study and application to real data.

It has been suggested that random survival forests should be used in a complementary manner with existing parametric and semi-parametric in analysing time-to-event data. Work like Nasejje’s is important for developing efficient methods to accurately analyse public health data to positively influence policy and the resultant flourishing of a country.

Nasejje completed her Bachelor of Science in Education majoring in Mathematics at Makerere University in Uganda. She received a bursary to study at the African Institute for Mathematical Sciences (AIMS) in Muizenberg for a Postgraduate Diploma in Mathematical Sciences, after which she joined UKZN for masters and PhD studies, under the supervision of Professor Henry Mwambi who she had met at AIMS, and Dr Maia Lesosky at the University of Cape Town.

Mwambi’s work in Biostatistics and UKZN’s reputation for stellar research drew Nasejje to the University.

‘As a mathematician, I wanted a field where I could employ mathematical skills to solve real world problems,’ she said.

Nasejje says her studies have been challenging yet transformative, leading her to grow socially and academically. She has also been able to develop a network of friends around the globe through her attendance at local and international conferences.

She expressed gratitude to funders who made her studies possible, including the German Academic Exchange Service, AIMS, the DST-NRF Centre of Excellence in Mathematical and Statistical Sciences and UKZN. Nasejje also thanked Mwambi and Dr Faraimunashe Chirove for their encouragement, and her husband Bangirana Albert for his support. She also credited the rector, Reverend Janet Trisk, and community at St Alphege’s Church for their prayers and support.

Her next move will be to settle on one of the employment or postdoctoral study offers she has received, with the goal of continuing to build her research and teaching profile.

Another passion of Nasejje’s is to empower young women and encourage them to consider careers in Science, Technology, Engineering and Mathematics (STEM). She and a colleague are planning to launch an organisation called Tendeka, meaning “training”, which will involve enrolling girls from less privileged backgrounds to mentor and offer financial help where necessary to achieve their full potential through education. Developing from a 2015 pilot study and using their own savings, they have already enabled one girl to complete high school after facing familial problems.