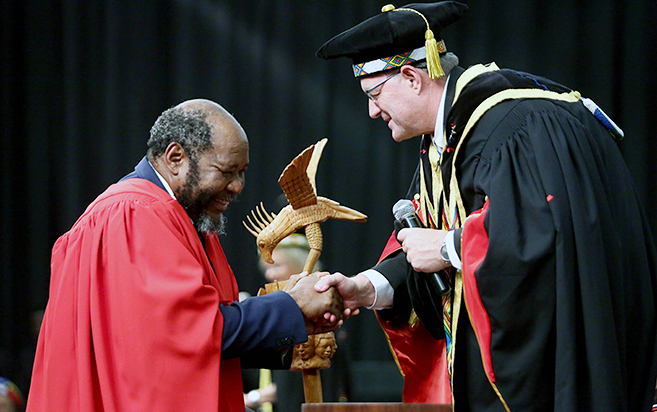 South Africa’s former and longest-serving Statistician-General, Dr Pali Lehohla, was awarded an honorary Doctor of Science from the University of KwaZulu-Natal.

Lehohla, who is originally from Lesotho, expressed his appreciation for what he called the ‘unique honour of the accolade.’ He said the mountain kingdom was roaring at the news of his receipt of this honorary degree, the second honorary doctorate to be bestowed on him by a South African university.

He was Director of Statistics in the former homeland, Bophuthatswana, where he had been counting South Africans since his tenure there began in 1982.

The former Head of Statistics South Africa (Stats SA) has been well known for his work in population and social statistics through his work at Stats SA, the organisation behind the national census that ‘painted the country yellow,’ said Lehohla, famous for his yellow suits during the count.

Lehohla has been called on, because of his experience, to advise on in-conflict, post-conflict and fragile political environments. He has assisted in various capacities with censuses in Cambodia, Sudan, Afghanistan and Iraq.

Lehohla has contributed to initiatives that focused on the enhancement of statistical literacy in a number of ways. In recognition of these efforts, the South African Statistics Association (SASA) instituted the Pali Lehohla Award for the best emerging statistician. He led the development of partnerships between South African universities to advance statistical training, research and applications. One of the notable initiatives was the establishment of the Centre for Regional and Urban Innovation and Statistical Exploration (CRUISE) at Stellenbosch University.

He cited the skills shortages in the field of statistics and mathematics in South Africa, and praised UKZN and Stats SA for their laudable efforts to combat this by educating teachers on statistics through the ISIbalo legacy programme.

In a recent article in the Sunday Independent, Lehohla lauded the efforts of UKZN’s Professor Delia North, UKZN colleagues and Stats SA in their work to develop Mathematics education in the country. One programme achieving this is Maths4Stats, a feature in UKZN’s Statistics calendar.

North spoke fondly of Lehohla, commending him for his graciousness and generosity in always supporting and appearing at Maths4Stats events to present prizes as a tremendous boon to her efforts.

Lehohla completed his 17-year term as Statistician-General in October 2017, and has been spoken of by former colleagues as a jovial, big-hearted and wise man whose ambitious visions inspired those he led to achieve more than they thought possible.

He said it was a privilege to lead Stats SA, adding that providing high quality evidence during turbulent times in South Africa was a bedrock of democracy.

‘My motto has always been to play a self-liquidating catalytic role and as I reflect I can lay claim to having achieved it,’ said Lehohla.

Lehohla credited much of his success to his colleagues, particularly at Stats SA, with whom he worked to build a reputable, respected institution.

Colleagues and collaborators in statistical fields regularly request his input in their work, referencing his experience in producing and using data at national and global levels, as well as his proven record of accomplishment in capacity building.