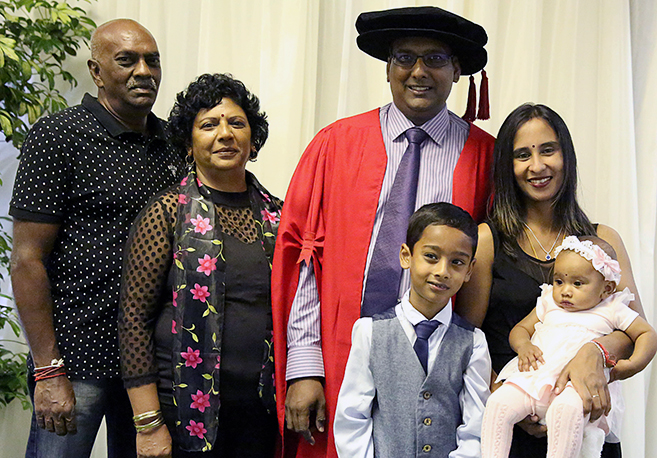 Distinguished Teacher Brings Out the Best in His Students

Professor Naven Chetty, Acting Dean for Teaching and Learning in the College of Agriculture, Engineering and Science (CAES) received the Distinguished Teachers’ Award (DTA) from the University of KwaZulu-Natal in recognition of his excellent teaching portfolio and use of educational media and learning material, developed over his 12 years at the Institution.

He said some of the biggest influences in shaping his love for Physics were Professor Roger Raab, Professor Clive Graham and Dr Vincent Couling.

His focus on Applied Physics with a sub-focus in Physics education has enabled him to promote a better understanding of the discipline. He has also delved into Biomedical Physics, especially the development of protocols for and use of lasers for cancer treatment.

Early in his career, Chetty was responsible for the development of course content for Physics in the BSc4 Augmented programme, much of which is still used.

‘My approach is student-centred. I adapt my teaching to the class I have,’ said Chetty, adding that no two years are the same.

He said there was a need for extra preparation to ensure his teaching was tailored to the capabilities of his students.

Chetty sees himself more as a facilitator of learning than a lecturer, and utilises a problems-based approach and positive reinforcement to encourage students to grasp skills rather than simply get through content.

Chetty is passionate about teaching first-year students as it provides the opportunity to instil a love for the subject into students. He recognises the challenges many new students arrive with after going through a poor schooling system.

He said the biggest problems faced by students were food security, mathematical skills, and the language divide. Being cognisant of the language and cultural differences has enabled him to adapt textbook questions to a South African culture and context. He explained that part of the challenge is also the need to learn a new language to have concepts adequately taught. He is purposeful about looking around his lecture hall to see who is struggling to keep up.

Teaching a subject like Physics, which is perceived to be unappealingly difficult, has led Chetty to explore methods of linking his material to real-world examples, experiments and technology during his lectures. He also links what he teaches to current events.

Chetty believes in capitalising on the technology already being used by students, by making use of technologies such as available smart phone applications and selecting appropriate “apps” that will enhance his students’ grasp of their work.

Chetty runs a tight ship in his classroom, not tolerating ill-discipline, but also encourages interaction.

‘There is no such thing as a stupid question,’ he said.

Chetty is known for being approachable, and received the CAES DTA in 2015.

Chetty’s student, Mr Oluwabamise Adeleye, described him as an extraordinary teacher and a kind and generous human being with amazing ability to connect with all his students. He also spoke of him as a thoughtful and purposeful scholar and mentor, who is always willing to assist others despite his busy schedule, and who is committed to ensuring understanding.

With 13 postgraduate students currently under his supervision, Chetty also prioritises innovative and continuous assessments for honours level, and runs writing skills workshops and presentation sessions for his students.

Students who have inspired Chetty include his first two masters students, Mr Arshath Ramkelowan and Dr Sphumelele Ndlovu, who have made significant strides in their careers. The applicability of Physics to multiple fields means all of Chetty’s masters students go on to find employment in various fields.

‘The greatest acknowledgement of doing great teaching is when students tell me so,’ said Chetty.

The father-of-two said the greatest rating was fatherhood, and thanked his wife and children for supporting him and putting up with his late nights. He also thanked his parents and late maternal grandmother.